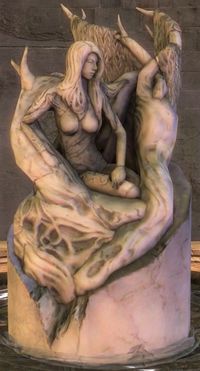 In the presence of Melandru, I felt my weariness wash away, as if rejuvenated by the sweet embrace of Spring. Wherever she walked, the sun shone, and truly, I felt the beauty of life.

Melandru is the goddess of nature, earth, and growth.[1] Her deep connection to earth and nature gives her power over many living things, both flora and fauna.[2] Legends of the charr say that Melandru was the one who created Tyria (though this is false), and human legends say that she was the third of the Six Gods to arrive on the world. She is the oldest and wisest of the Six Gods, and, with Dwayna, attempted to bring peace to the races of Tyria.[2][3]

Melandru is often depicted as having a human female torso and a lower body made from wood. Statues of her are said to give healing and water to those with the favor of the gods. Before the Cataclysm, Orrians worshipped Melandru at the Cathedral of Verdance. In the present day the Church of Melandru worships the Goddess of Nature.

The quaggan revere a goddess named Mellaggan, who they believe has been killed by the krait. Human scholars believe this goddess to be a depiction of Melandru due to similarities between the two goddesses and the quaggan's using a sunken statue of Melandru as a makeshift shrine to Mellaggan. The quaggans would disagree with this interpretation, but are simply too polite to do so.[4][5] The norn refer to Melandru as a Spirit of Action.[6] 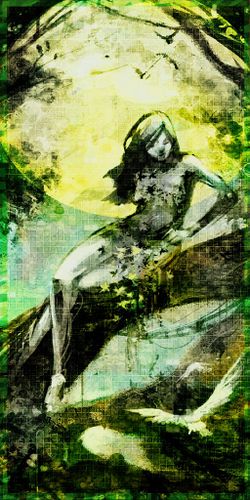 According to the Orrian History Scrolls, Melandru was the third god to arrive from the Mists and the oldest of the Six.[2] Although the gods were initially drawn to the magic of the Artesian Waters in the heart of Orr, they took humanity with them to Cantha in 786 BE, planting the seeds of the first known thriving human civilization in Tyria.[7][8][9][10] With the urging of Balthazar, the God of War, humanity began claiming Tyria for themselves at the expense of the native Tyrian races. However, the natives resisted human expansion better than the God of War had expected. Despite this, humanity proved to be resilient and spread to Orr, Elona and beyond in the following centuries.

According to her scriptures, Melandru witnessed a tribe of godless humans led by Ewan senselessly destroying everything in their path as they wandered the land. She directly intervened by blocking their path with a wall of thorny branches and appeared before them in the shape of a large tree with the upper torso of a woman while introducing herself. The Goddess of Nature punished Ewan's tribe for the destruction they had caused by binding them to the land and transforming them into tree-like stewards of nature. At some point druids, a tribe dedicated to Melandru, appeared in the Maguuma Jungle and shed their physical bodies in a ritual to become arboreal spirits who would protect and nurture nature. Over the centuries others sought the druids out and joined their Henge.[11]

As Orrians worked on building the great city of Arah for the gods, Abaddon, the God of Knowledge, designed a set of magically warded reliquaries where the gods could keep their priceless and powerful artifacts, relics and knowledge safe from thieves and defilers. Melandru was given one of these reliquaries.[12] During this time the gods gathered various powerful and ancient artifacts from around the world, including the original Bloodstone and the Mystic Telescope, and brought them for safekeeping and study in Arah.[13] Members of the Church of Melandru dedicated themselves to the Goddess of Nature and worshiped her at the Cathedral of Verdance. Like other members of the Six, Melandru had a dirge dedicated to her which was sung by the Sirens of Orr.[14]

At some point the gods became aware of the existence of the hibernating Elder Dragons, who were tied to the magical balance of Tyria, and learned their names and spheres of influence. This information was documented in what would come to be known as the Scroll of the Five True Gods.[15]

The gods lived for a time among their followers in Arah. However, their radiance blinded mortals who gazed upon them for too long whenever the gods appeared among their followers. The gods eventually decided to retreat from public, and Dwayna commissioned the Orrian sculptor Malchor to make a statue of each god. As the statues were completed, the respective gods depicted in the statues retreated into Arah one by one.[16]

Around 48 BE,[17] the old and tyrannical God of Death, Dhuum, was overthrown by Dwayna's half-god son Grenth who ascended to godhood and was welcomed by the gods as the new member of the Six. 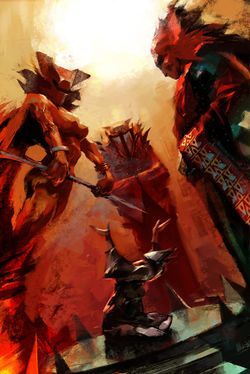 King Doric prostrates himself before the gods.

According to an ancient Ascalonian legend and an Orrian scroll, the gods formulated a magical ritual and gifted three holy artifacts needed to enact and reverse it—a magical crown, Balthazar's own sword Sohothin and its twin Magdaer—to the royal human lineage as protection against invasion. The artifacts, as well as the knowledge how to use them in the ritual, would eventually pass on to the Ascalonian line of human kings.[18][19]

In 1 BE, the Six decided to gift magic to the mortal races. The gift of magic made the mortal races greedy, however, and led to devastating wars. King Doric, who had become the ruler of Tyria's united human tribes, journeyed to Arah and asked for the Six to put an end to the bloodshed. According to the Orrian history scrolls, Dwayna in particular was greatly moved by the suffering the wars had caused and offered consoling words to Doric that would become the basis of teachings for the priesthood of Dwayna. In response to the king's plea, the gods shattered the original Bloodstone and divided the magic in the world into five lesser Bloodstones to prevent anyone from ever wielding power over all magic again. According to the History of Tyria, the gods sealed the stones with Doric's blood and placed his bloodline in charge of guarding the stones.[20]

Abaddon turned against his fellow gods because of a disagreement over the gifting of magic among many other escalating events that followed the sealing of the Bloodstones. The rebellious god and his army of Margonites were defeated after their failed assault; however, the gods' victory came at the cost of the Crystal Sea turning into the Crystal Desert and a once plentiful land becoming the sulfurous Desolation. Balthazar himself forged the chains that bound the fallen god in the Realm of Torment.

The Five realized the damage which the war against Abaddon and the gifting of magic from earlier had caused to the world and decided to leave humanity to stand or fall on its own merits without further meddling.[21] They departed from Tyria in 0 AE in an event known as the Exodus of the Gods. The Five entered the Mists and continued governing their respective realms from there although they did not sever their ties with Tyria completely as their power was still felt in the world for centuries to come. Melandru's connection to druids lessened, and they eventually lost contact with her.[11]

At some point, Wintersday traditions, centered on the rivalries of the gods and the changing of the seasons which would symbolically determine whether darkness or light would reign following the coming of the new year, emerged among humanity. Avatars of the gods appeared on Tyria and asked participants to choose which of the two teams to side with for the festive, annual competition which would decide whether Dwayna or Grenth won. Dwayna, who was supported by Melandru, fought to return spring to the land and bring joy to the hearts of humanity via renewed life, while Grenth, who was supported by Balthazar, fought to prolong winter and offered a less frivolous outlook on life and somber reflection on death as part of the circle of life.[22] These festivities also included the Great Snowball Fight of the Gods.

Around this time, Dwayna's magic created the first Brrrls, or snowmen, to spread Wintersday cheer and hand out gifts from the Secret Lair of the Snowmen, while Grenth's magic caused unfortunate victims to transform into the mischievous Grentches who would spread misery in their wake as well as steal and hide gifts of innocent children in remote locations such as the Underworld.[23][24]

When Abaddon began Nightfall in order to break free from his prison, the gods chose not to intervene directly. However, the Five gave a blessing and words of encouragement to Spearmarshal Kormir's party via their avatars as the mortal heroes entered the Realm of Torment to defeat Abaddon once and for all.

And it was that a tribe of godless humans wandered the land. Where camped did they lay waste, senselessly destroying everything nearby.

And so the tribe set out to find another camp, when suddenly sprouted a wall of thorny branches, which blocked their exit.

Then saith Ewan, leader of the tribe, "Know ye our ways. Whosoever does magic in this tribe shall be put to death."

Yet none comes forward. Then, from the earth grows forth a large tree, and unfurling its branches, reveals the upper torso of a woman. Saith She, "I am Melandru, the Mother of earth and nature. Henceforth I bind ye to these lands. When they suffer, so shall ye suffer."

And as She saith, so was it done. From their limbs sprouted branches, and the blood in their veins was the sap of trees. Then was Ewan and his tribe converted, and became they stewards of nature.

Next came the goddess of nature. Wise Melandru, oldest of them all, made of Orr a green and flowering expanse. She urged peace with the races already present on this world, but her advice was not heeded.

When she saw destruction, she brought creation. Where she saw anger, she grew love. With this, Melandru prepared for a future she knew would be troubled.

One day, the goddess Melandru came upon a den of foxes, and she heard within the hungry cries of kits. She bent her ear to the ground and learned that the mother fox had been killed by a farmer.

The cubs were doomed to starve to death, and thus was the way of nature. Melandru sought out the farmer, and asked him why he had killed the fox, thus condemning its kits to sure death.

The farmer explained that the fox had killed one of his chickens, and therefore he had taken his vengeance upon the fox. "Thus," said Melandru, "is the way of nature."

Later that year, the farmer prayed to her, calling her name in his darkest moment. In his presence, she saw that he was in mourning and asked what had happened.

"Wolves," he said, "have taken my daughter. Can you not bring her back to me?"

Melandru was not unkind as she said, "No. Thus is the way of nature."