Example of a waypoint

This is a waypoint. Waypoints appear on your compass, which is in the lower-right corner of your screen. You can also see them on the world map, which you can access by pressing "M." Press "M" again to close the world map. To teleport to a waypoint, open your world map and click on the waypoint to which you want to travel.

Waypoints, commonly abbreviated to "WP", are a method of transportation and fast map travel in Guild Wars 2.

Players can instantly travel to a waypoint by using the map. Before a character can use a particular waypoint for map travel, it must be discovered through exploration. Undiscovered waypoints will be displayed on the compass and map, and approaching the waypoint will unlock it for that character.

Map travel within a city is free (except for travel from the home instance), but traveling to waypoints in other parts of the world costs a fee in coin based on the distance between the character's current location and the destination waypoint, as well as the character's non-scaled level.

During and after dynamic events, waypoints can become contested if the area is taken over by enemies. These waypoints will be unavailable for map travel until they have been liberated. Contested waypoints are not shown as contested when viewed from a different map; attempting to travel to a contested waypoint will take you to the nearest available one, for the original cost.

A normal zone in the base game typically has between 10 and 20 waypoints, while expansion content generally has less than 10 in a zone, following player feedback that waypoints were too numerous.

Waypoints cannot be used while in combat (the message "you cannot map travel while in combat." appears in red text if you try to do so). Defeated players can choose to be revived at a waypoint for the same fee as regular map travel. If a character is defeated with no coin, they can be revived for free at the nearest waypoint.

According to Technician Penn, waypoints are mini-gates and magical matter-transportive devices[1] devised by the asura to make it easier to travel long distances.

During the events of Season 2 of the Living Story, it is revealed that waypoints will only function if placed on a ley-line.[2] If a waypoint was not placed on a ley-line, it would eventually fail, and the asura would remove it in order to ensure the waypoint network remained stable.[3] Therefore, the asura have unknowingly mapped the location of ley-lines all over Tyria. This discovery by Scarlet Briar allowed her to locate the massive leyline hub under Lion's Arch, disrupt it, and awaken Mordremoth.

Shortly after, Mordremoth's vines started entangling waypoints, even destroying some like at Fort Marriner. Taimi deduced Mordremoth's vines were attracted to the waypoints' magical resonance and developed a machine that could tap into the waypoint network and retune waypoints to a different frequency that was less attractive to the Mordrem. There was some inconsistency in the Living Story as to what frequency would be less attractive to the Mordrem. In The Machine, Taimi says they needed a higher frequency, but in Recalibrating the Waypoints she says they needed to vibrate at a slower rate.

Taimi's machine was commandeered by Councillor Phlunt when it was found to work, and since then, vines have no longer been seen attacking waypoints. The implications of this machine are that the waypoint network can be "hacked", and that waypoints are somewhat programmable.

Each new character starts with one waypoint unlocked in each of the starter maps of the 5 races:

This allows characters of different races to play together and explore each others' starter zones.

Players can use (Left-ALT+Left-click on the map to place a permanent marker (white star) that is visible to others in the party as a blue star. These are called personal waypoints. What you see:

When you mouseover another party-member's personal waypoint a popup displays the character's name and your distance from the waypoint.

These markers can be moved by repeating the above key-mouse combination in a new location or removed with a Left-click at the waypoint's current position. It will remain in its place until moved or removed even between map changes or gaming sessions. It is character-based, each character on an account may have a different one.

Although called "personal waypoint" they are just markers. They do not behave like actual waypoints, you cannot use them to teleport your character to another location.

Players with the Jade Tech Waypoint mastery from the Jade Bot mastery track can place a waypoint where they are located.

In brief, the cost of using a waypoint increases with both character level and distance. 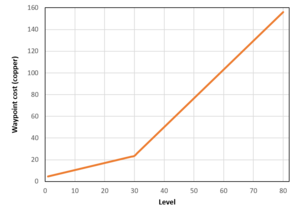 Waypoint cost versus level for travel from the Cornucopian Fields to Vigil Keep waypoints (41,573 units)

The total cost of traveling to a waypoint depends on your level and the distance traveled [4], and can be determined as follows:

There are two level dependent constants, C1 and C2, which are determined by a lookup table:

The distance for this equation is measured in the unit that appears when hovering over markers on the minimap or in skill descriptions, i.e. inches.

Bug:
Traveling to a waypoint is unsuccessful if attempted in the midst of losing a connection to the server, or if attempting to waypoint to another map with a different build number from the one you're on. You will still be charged for the waypoint cost, and unfortunately there is no refund.

The number of waypoints required for map completion has changed over time, from 477 during the first Beta Weekend event to 503 when the game launched. Since then, other waypoints have been added, and the WvW waypoints, along with all WvW Vistas, POI's, and Hero Points have been removed from the map completion requirement. All of these ARE still available, and the WvW Hero Points are still added to the character's totals.