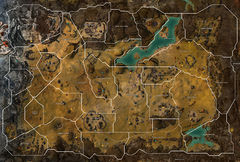 The Diessa Plateau's ranches and mills supply the legions with food and materials critical to their operations. Saboteurs, such as human Separatists and the Flame Legion, prey on workers, buildings, and requisitions shipments throughout the region.

The Diessa Plateau is a low level zone in Ascalon. It is found north of the Plains of Ashford and the Black Citadel.