This article is about the zone. For the achievement category, see Tangled Depths (achievements). 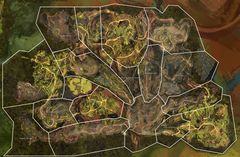 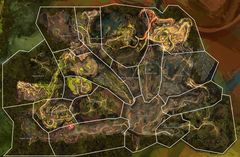 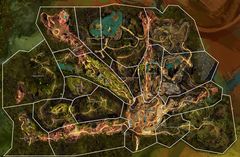 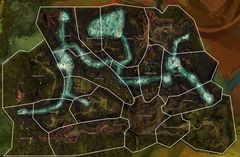 Tangled Depths is a zone in the Heart of Maguuma that features the roots of the jungle, one of the 3 main biomes that make up the zones in the Heart of Maguuma. The main enemies encountered here are the Chak, insect creatures with an affinity for ley-line energy. It is also home to the Nuhoch hylek tribe, and the location of the lost asuran city of Rata Novus.

This zone also contains deep, water filled tunnels spread around under the map called The Depths. These passageways can be accessed at various points throughout the map by means of large sinkholes. Certain areas of The Depths are shrouded in darkness, containing unavoidable fish that will quickly kill travellers unless they have interacted with an Exalted Beacon.

Tangled Depths is notorious in-game for being awkward to navigate. Outpost waypoints begin contested and can only become available after completing the local events. Along the southern edge of the map in the center is the Ley-Line Confluence Waypoint - visible on this map of the lower floor. However unlike other zones where undiscovered waypoints show up on the in-game minimap from a good distance away, this undiscovered waypoint will not show up until you are in the Ley-Line Confluence area and you are practically on top of it. From this point four tunnels radiate outwards towards the four camps, clockwise from bottom left; Ogre, Nuhoch, Rata Novus and SCAR. If one can get to the Ley-Line Confluence it is then possible to reach each of the four camps.

Characters first arrive in the map at the Order of Whispers Camp, high up to the west. Travel southeast until reaching a deep canyon, jump into it and glide northeast until seeing a waterfall, at which point follow the water further down to the lowest level where the tunnels are. Having followed these directions, one will arrive at the northwest end of the Nuhoch Lane - head southeast to reach the Ley-Line Confluence.

Additionally, it is very helpful to gain the Mastery of Nuhoch Wallows (tier 2 of the Nuhoch Lore mastery track) - each of the lower tunnels has a Nuhoch Wallow providing access to the camps, and vice-versa.

It is highly recommended to find a Hero Point/Mastery Point train running in this zone which will allow opening of various waypoints in the process of obtaining Hero Points and Mastery Points. If you ask the leader/commander, they may have the train pass by the Ley-Line Confluence Waypoint.