A festival is an in-game celebration of an in-game holiday or seasonal event, although some of them tend to closely follow specific real world celebrations. Many of these events have been observed ever since the first Guild Wars series. They are usually introduced as major features of releases. Many of them include their own thematic map decorations, rewards, activities, and dailies. Recent festivals have lasted for about 3 weeks. 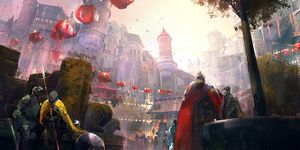 Lunar New Year is a celebration of the new year in the Canthan calendar and of the particular Celestial Animal which will watch over Tyria during the coming year. It takes place during January or February, corresponding to the real-world Chinese New Year.

It is held primarily in Divinity's Reach and it features lighting of firecrackers or other fireworks, opening Lucky Envelopes for a chance of gold, luck or other seasonal items, and the Dragon Ball Arena. 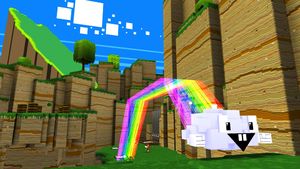 Originally created for April Fools' Day 2013, Super Adventure Box is a special dungeon focused on old school platforming, with pixelated graphics and retro soundtrack, designed for any party size. Baubles and various coins can be gathered inside to exchange them for holographic weapon skins and other rewards. 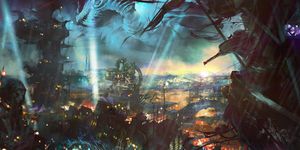 Dragon Bash is a summer festival celebrating resistance and victories against the Elder Dragons. The first edition of the festival was celebrated in Lion's Arch and then was moved to Hoelbrak, where heroes from all across Tyria challenge themselves against holographic representations of Elder Dragon's minions, compete in races and other events.

Festival of the Four Winds[edit] 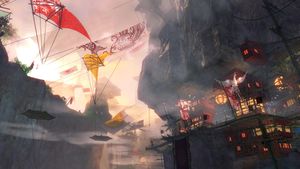 The Zephyrites land on the Labyrinthine Cliffs and bring various activities, mount races, adventures and scavenger hunts. At the same time, Queen Jennah opens The Crown Pavilion with the Boss Blitz events fighting enchanted Watchknights made to look like humanity's main enemy forces, and the Queen's Gauntlet arenas with increasingly difficult 1-on-1 fights against the queen's champions. 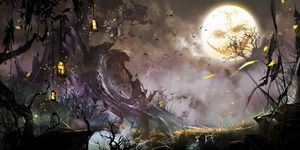 Halloween, based on the eponymous real-world holiday, is a festival celebrated in October and November.

During this time, the boundary between Tyria and the Underworld—in particular, the realm of the Mad King Thorn—grows thin. Portals open up, spewing out various Halloween creatures into the world, while players can enter the realm for access to many activities, the Mad King's Clock Tower jumping puzzle as well as the Mad King's Labyrinth. The king himself attempts to break free back into Tyria for good and repeatedly visits Lion's Arch, telling his characteristic jokes, playing Your Mad King says while killing anyone who disobeys his commands. 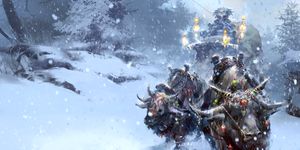 Wintersday is a winter festival celebrating the new year in the Mouvelian calendar. It takes place in December and January, corresponding to the real-world Christmas and the New Year.

The festivities include several winter activities, including the Winter Wonderland jumping puzzle, Bell Choir Ensemble, Tixx's Infinirarium, Toypocalypse and the Snowball Mayhem. It is the season of giving and receiving gifts, with several donations of food, coins and clothing taking place around Divinity's Reach.