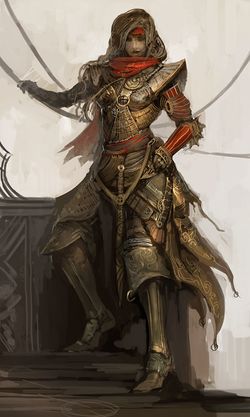 Lawless, untrustworthy, and self-serving, corsairs have been a thorn in the side of seafarers and land-dwellers alike for far too long. Though corsairs claim to follow a code that dictates proper behavior, this code does not extend to non-corsairs, and they are free to treat outsiders as they please. Any who attempt to make deals with corsairs should keep an eye out for treachery. Even if you pay them, there's a chance they'll sell out to a higher bidder after the mission begins.

Corsairs are outlaws situated around Elona. Similar to the multi-racial pirates of Central Tyria, they consist of thieves, cutthroats, and mercenaries willing to work for money but preferring to do what they please.

Unlike the northern pirates, corsairs will act by an overarching agreed upon rules dubbed the Code of the Corsairs—an extensive and sometimes contradictory set of rules which dictates loyalty, rules of engagement, and monetary management.[1] Corsairs hold various havens where multiple ships can gather, such as Freetrader Haven, with rules of non-hostilities. These havens are seldom perfect, and, as best one can tell, none are universal; Freetrader Haven, for example, houses only four crews nowadays.[2]

Corsairs were first recorded organizing into groups in 324 AE. When Palawa Joko had begun his first invasion of Elona, among his undead armies were hired mercenaries and corsairs.[3] Since then, Elona suffered two wars now called the Great Corsair Wars. The first recorded mention of corsairs in Central Tyria was shortly after the end of the Second Great Corsair War in 1016 AE when Lady Glaive sought refuge from her defeat in the Shards of Orr.

After the Great Corsair Wars, the corsairs continued to plague the shores of Elona, making refuge in the shallow reefs of the Unending Ocean between Elona and Cantha.[1] Many corsairs also made their base along the Barbarous Shore, Dajkah, and Mehtani Keys. After the Cataclysm in 1071 AE, many corsairs occupied the mostly deserted island remnants of Orr, plundering the remaining goods and using the islands as cover. They remained there until 1219 AE, when the Elder Dragon Zhaitan emerged from the depths of Orr and rose the peninsula. Many of the corsairs fell victim to the waves and more were turned into Risen minions of Zhaitan afterward while several corsair ships were seized and turned into Bone Ships which the Risen used to patrol the sea around Orr and the Ring of Fire.[4]

After Palawa Joko began conquering Elona, corsairs founded modern Amnoon by convincing nomads from the Desert Highlands to settle in the area.[5] A grand temple, which became the Tomb of the Abandoned, was built near Amnoon to immortalize one of the city's corsair founders as a minor deity in order to unify the corsairs and the tribespeople. However, the founder's name was ultimately lost as time passed.[6]

In 1230 AE, some corsair crews, along with other mercenaries and pirates, settled in Lion's Arch, rebuilding it with the wreckage of the shipwrecks caused by the waves. They are now one of the groups that populate the free city, and many captains belonging to the Captain's Council rule over it. A crew called the Crafty Corsairs began terrorizing Bloodtide Coast some time later and, by 1325 AE, had allied with Admiral Taidha Covington.

By 1330 AE, a major corsair haven existed at the Corsair Flotilla off the coast of the Domain of Istan where various crews met to trade. Several corsairs in the region collaborated with the Mordant Crescent to hunt down members of the Order of the Sunspears and other enemies of state who had bounties on their heads. Some corsairs also joined their forces with Joko Loyalists to come aid Palawadan, Jewel of Istan against the Sunspear uprising should the need arise. A small group of corsairs was known to reside within the Whispering Grottos in the Elon Riverlands, training Cobalt Eels to guard their lair.

While on a mission to stop Palawa Joko and the Elder Dragon Kralkatorrik, the Pact Commander successfully convinced the Sly Crew of corsairs, led by Captain Sayida the Sly, to assist the Sunspears and their allies against both threats, leading to the Battle of Gandara, which led to Joko's demise, and the Battle of Thunderhead Keep against Kralkatorrik and his Branded horde. Although the corsairs lost many crew members in these assaults, the survivors continued assisting the Pact and fought against the wounded Kralkatorrik in the Battle of Dragonfall, witnessing the death of the Crystal Dragon and the ascension of his replacement, Aurene, in 1332 AE.