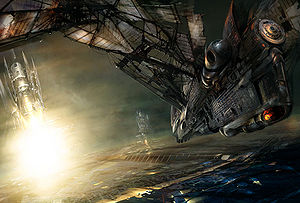 Early concept art of an airship.

Airships are, as the name suggests, vessels capable of flying through the air. Airships use magitech to stay aloft.[1]

The original airship prototypes were of charr design,[2][3] but with the formation of the Pact and the offensive in Orr in 1325 AE, other races, particularly the humans and asura, were able to contribute their own ingenuity,[4] and the airships became somewhat emblematic of the Pact and the struggle against the Elder Dragons. They were seen in the skies above Orr in battle with dragon champions of Zhaitan.

In 1326 AE, Aetherblade pirates commandeered several airships and modified them while they worked with the Inquest. Their airship fleet eventually grew to the point of enabling large-scale invasions across Tyria, culminating in the Battle for Lion's Arch before their forces and the rest of Scarlet's Alliance were routed.

In 1328 AE, most airships operated by the Pact, including the flagship called The Glory of Tyria, were destroyed by Mordremoth during the assault on the Heart of Maguuma. Airships that were able to be salvaged from the wreckage were later refurbished in the Lion's Arch Aerodrome.

In 1330 AE, Captain Ellen Kiel had her airship, the Phoenix Dawn, transport the Pact Commander to the Free City of Amnoon to stop the invasion of the Forged. Istani corsairs acquired what resembled an Aetherblade airship in a raid,[5] and Captain Sayida the Sly managed to purchase an airship with her bounty money and used it to assist the Pact Commander in the assault on Rata Primus, the Inquest's main facility on Sandswept Isles, in 1331 AE. Airships provided aerial support during the Pact's battle against Kralkatorrik in Thunderhead Peaks in 1332 AE. 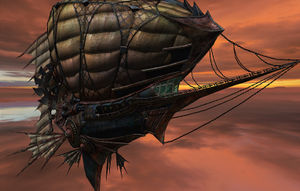