From Guild Wars 2 Wiki
Jump to navigationJump to search
Stub. Key elements of this location article are incomplete. You can help the Guild Wars 2 Wiki by expanding it.
Reason: Missing Isle of Reflection stuff

A guild hall is a private region for your guild that you can build up and decorate over time. The proprietors in your guild hall are the primary source of upgrades for you to improve your guild.

Guild halls are areas for guilds to play, battle, socialize, and progress together. Once owned, they can be quickly accessed from anywhere in the game via the guild panel. 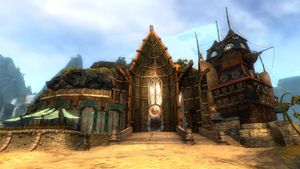 The Guild Initiative Headquarters acts as a miniature guild hall and is available for all guilds. It is an instanced area accessed by entering the portal next to the Guild Bluff Waypoint in the Postern Ward area of Lion's Arch.

Accessing the Headquarters for the first time will grant your guild its first Guild Upgrade Prerequisite.

Upgrade Prerequisites do not give new services but instead unlock access to better upgrades. The most common prerequisite upgrades are Building renovations.

Inside the Headquarters you will find the following services:

By speaking to Grímur Oddursson you can purchase the first Guild Upgrades in exchange for Favor and Gold.

Speak to the relevant Guild Hall Explorer at the Guild Initiative Headquarters in Lion's Arch; each NPC represents a different Guild Hall. They also offer a cinematic preview of their Guild Hall.

In order to claim a guild hall, you will need to purchase one of the following upgrades.

The player initiating a claim to a new guild hall requires the following:

If you meet the necessary requirements, you can initiate an "expedition" to claim the hall of your choice. That expedition remains open until you successfully take over the hall; you can keep trying without having to pay again.

Once you arrive at the unclaimed Guild Hall you will need to complete an event to clear the map of hostile enemies.

This guide has been written from the perspective of a Heart of Thorns guild hall, however the event plays out similarly for each Guild Hall - the foes within the Windswept Haven are however substituted for Awakened.

First phase - Groups of enemy Mordrem, and Mordrem Vinetenders with breakbars protecting Mordrem Maws: The expedition begins with five waves of Mordrem Maws that spawn in random locations around the map and must be defeated within a short time limit (3 minutes and 30 seconds). The number of Mordrem Maws that spawn per wave scales based on the number of players in the instance. Spread out in teams of 5-10 players each and assign commanders to cover various areas of the map. When you reach a Mordrem Maw, it will have a shield up protecting it; kill the Mordrem Vinetenders to bring down the shield. If players fail to defeat all of a wave's Mordrem Maws within the time limit, the map-wide air toxicity will raise, as indicated by a bar in the upper right corner. If the air toxicity bar fills completely, the expedition fails. However, you can repeat this step as many times as needed.

Second phase - Legendary foe(s): After you have cleared five waves of Mordrem Maw, a Legendary Mordrem Commander Axe, or multiple legendary mobs of the same name, will spawn. The number that must be defeated depend on the number of players present. The Vinewrath Knights are heavily armored, however their armor can be removed by breaking the Defiance bar. Otherwise they function similarly to Legendary Axemaster Hareth. Some Vinewrath Knights are not easily fought in melee so you may need the use ranged weapons.

Victory - The Crystal Chamber: After all Vinewrath Knights are defeated, the Vinewrath blocking the crystal throne will wither away and a guild leader with appropriate permissions can interact with the crystal to claim the hall for your guild. Once you've claimed a guild hall, you are sent into the guild hall proper and it is time to begin upgrading.

For completing the expedition you will earn another Guild Upgrade Prerequisite and unlock access to the Guild Hall.

Guild Interface and selecting "Guild Hall" to the right side by your Guild Level.

Changing halls is the same as claiming the original: someone with the relevant permissions must speak to the destination's Guild Hall Explorer, and you must make an additional payment of 100

. Your team must also successfully complete the expedition event. It is a good idea to remove all decorations, as otherwise they remain at the same map coordinates, which will be inconvenient in the new hall. The new hall retains all improvements and upgrades as the original and there is no limit to how many times you can change, other than the cost.

After claiming your guild hall, many further upgrades are available that add buildings, improvements, and other features. Each upgrade has a different set of requirements that may include items, favor, gold, or Aetherium. These requirements must be met before the upgrade can be activated. Any guild member can look at the list of available upgrades however only a guild member with guild upgrade permissions can actually activate the upgrade.

The first steps on upgrading a guild hall should be done in the following recommended order as the rest of the upgrades are highly dependent on each other. The sequence of upgrades becomes more flexible as you progress. The upgrades listed here are in a recommended order.

Getting started on upgrading your Guild Hall[edit]

From here, the order does not matter. You do need to keep in mind prerequisites of upgrades however.

Guild upgrades will be primarily grouped around the six main buildings, each of which is associated with elements of guild gameplay. Locations vary.

With the exception of the guild hall explorer, all guild halls share the same NPCs, although they appear at different locations.

Guild Initiative service NPCs may appear and disappear depending on the current level of the guild that you are representing. The options offered will vary depending on your Guild permissions and whether your account has either expansion unlocked.

Certain objects only appear after the corresponding guild hall upgrade has been completed.