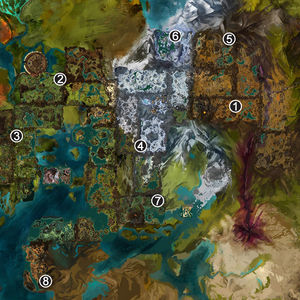 Dungeons are optional party-based PvE instances, each with their own story. There are currently nine dungeons. All dungeons have two modes: a story mode, which focuses on the story of the Destiny's Edge group; and an explorable mode, a more difficult mode which requires more co-ordination to play through and is unlocked after completing story mode. Each mode allows for groups of up to five players; content does not scale depending on the number of players in the party so the difficulty remains constant.

After game launch, dungeons were discontinued in favor of Fractals of the Mist, a special type of dungeon that consists of an array of mini-dungeons called fractals, where each fractal has its own story and environment.

Story mode does not reward tokens, but it does reward some coin:

Please note that 0 coin only means that the information has not been added to the wiki, all story modes reward coin.

Completing a dungeon in explorable mode awards coin, experience, and dungeon currencies. These currencies can be used at a Dungeon Merchant, to buy weapons, armor, runes, and other items. Each dungeon has its own unique weapon and armor set modeled according to the theme of the dungeon. These items are no more powerful than items which can be gained doing other activities in-game, the exotic sets are equal to the level 80 exotic crafted sets.

Completing an explorable path rewards 20 dungeon currency of that dungeon, 26

, experience equal to 70% of the character's level, 20 Empyreal Fragments, and karma.