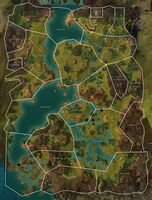 Broad estuaries give the Orrian undead easy passage into Sparkfly Fen. A wave of Zhaitan's minions drove hylek refugees before it and captured vast territory. Wyld Hunt valiants and Vigil crusaders fight to regain control from an untiring enemy.

Sparkfly Fen is a coastal zone in the Maguuma Jungle. It is littered with Risen and ruins of both ancient Kryta and Orr. It serves as the main battleground against Zhaitan's forces, which are led by his dragon champion, Tequatl the Sunless.

Despite the fact that the hylek usually don't ally with each other, many hylek tribes whose grounds were destroyed by the Risen have joined together at the Zintl Holy Grounds, seeking guidance from their god Zintl.

Cauliflower (node farm) - located on a plateau overlooking Orvanic Shore. They are accessed by going through a short tunnel at the north of the plateau.

Horseradish Root in Bulk from Laudren