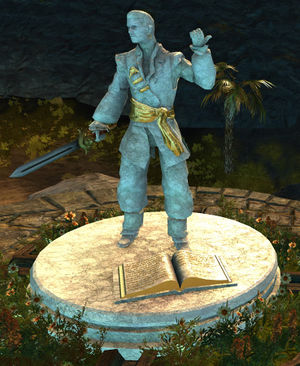 A statue of Cobiah Marriner, as it was seen in Lion's Arch, prior to its destruction at the hands of Scarlet Briar. The remains of the statue can now be found at the center of the Field of the Fallen.

I say we build a port of our own. We build it, and we defend it against Orr. We make it a free port, not beholden to any nation, open to anyone who sails the sea. We'll teach others how to fight against the dead ships, using charr weaponry, asuran innovation, and human courage. The port would be open to any and all, so long as they'll fight against Orr and help to keep the waters clear.

Commodore Cobiah Marriner (1203—1286 AE) was the founder and first Commodore of the rebuilt Lion's Arch, and grandfather of Commodore Lawson Marriner. A statue of him can be found in White Crane Terrace in Lion's Arch. He was buried on Deverol Island.

Marriner was raised in the poorer portions of Lion's Arch, living his childhood within a run down shack on the coast. His father, a former member of the military turned sailor, had disappeared at sea leaving Cobiah to live with his alcoholic mother who turned abusive after her husband's disappearance and his younger sister, Biviane. Before that, his grandfather had fought to save Kryta from the White Mantle. Due to the nature of his mother, Cobiah was forced to work multiple jobs to earn money for the family. In 1219 AE, his sister died in an accident falling from the docks, leading Cobiah to sign up for service as a mariner aboard the Indomitable. While aboard the Indomitable, Cobiah had traveled to Kaineng City as part of official trade with Cantha, making him one of the last Tyrians to have set foot on the southern continent.

Ten months into his voyage, the Indomitable was sent into the waters over sunken Orr to investigate the disappearance of ships. At Malchor's Fingers, the ship came into contact with the Maw just before Zhaitan awoke and Orr rose, leading to the sinking of the Indomitable. Cobiah was the sole survivor of that ship, and was rescued by the Havoc, an experimental Iron Legion ship carrying the first prototype steam engine for the charr that was crewed by the Steam and Shroud warbands. Aboard he befriended Engineer Steamshroud and the stowaway asura, Macha. Cobiah made an agreement with the captain of the ship, Centurion Harrow Shroudweather, to lead them to Lion's Arch and negotiate safe docking for the ship. However, when they arrived the city was sunken and barren, and the Havoc was attacked by a Krytan vessel, the Disenmaedel. When Harrow was killed, Cobiah threatened to blow up the vessel and everyone aboard to stop the fighting, and ended up unifying the two crews of humans and charr to serve together.

Over time and after many adventures his pirate crew attempted to steal the Capricorn, escaped the Risen forces destroying Port Stalwart, amassed gold stolen from King Baede's ship, Salma's Grace, sunk the Dead Ship Harbinger, and rebuilt Lion's Arch, among many other adventures and acts of piracy. Cobiah formed the first Captain's Council and dedicated years to Lion's Arch instead of sailing, earning the respect of the town and the honorary title of commodore. In 1256 AE, the Krytan crown prince Edair led a large naval and land assault to reclaim Lion's Arch for Kryta, in defiance of his father who had recently passed away. Edair captured Cobiah, his crew, and his family, but his conquest was thwarted when the Krytan navy was attacked by Dead Ships. Cobiah once again led the defense, uniting the citizens of Lion's Arch with those of Kryta to stand against the Risen, destroying their fleet and officially earning his city's independence from the Krytan nation. After the battle he remained in Lion's Arch with his wife Isaye and his son Dane.