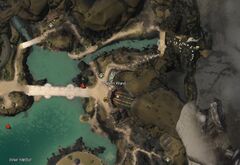 Urmaug's Secret is a jumping puzzle in the Postern Ward of Lion's Arch. It is named for Urmaug, the ogre camping by its entrance.

From Error: No waypoint named "Guild Bluff Waypoint" found. Check if it has been added to the area., follow the road east along the river towards the waterfall. Cross the bridge that passes behind the waterfall, and at the north end of the bridge, head east into the cave. The entrance to the puzzle itself is just behind Urmaug.