An activity is a mini-game designed to fit in with the local area. They provide an identical challenge to characters of all levels, and usually switch out weapon skills for new ones specific to the activity. While most involve some sort of PvP, not all involve player competition and can be a fun activity to do alone or with others (depending on the activity). Festivals tend to involve at least one activity. Daily Activity Participation is a periodically scheduled Daily achievement.

Activities change with the daily reset at 00:00 UTC.
Current time:

Activity Lead Cassi is the only activity NPC that grants access to all activities who is not in a lounge, and Karlotta and the Brewer do not provide direct access to the other activities if the activity they are near is not the daily one. 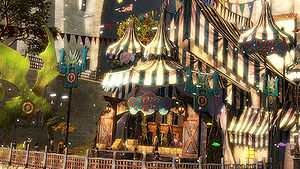