This article is about the zone. For the jumping puzzle, see Obsidian Sanctum. 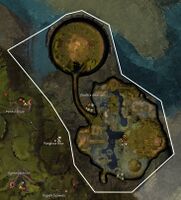 Obsidian Sanctum is an explorable zone in World versus World primarily to hold the Obsidian Sanctum jumping puzzle. Geographically, it is located in the northeast portion of Eternal Battlegrounds.

A large domed arena in the northwest is accessible from a tunnel north of the original central starting location.

There are exits to Lion's Arch next to each waypoint at the start of the puzzle and a fourth at the end.

Each of the three waypoints contain the following service NPCs:

Additionally the following NPC is available at the northwest arena: