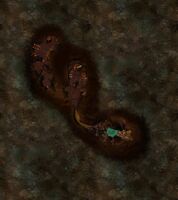 Map of Chantry of Secrets

The Chantry of Secrets is the Order of Whispers' base of operations in Tyria. The Chantry consists of an antechamber and a larger chamber. It is accessible by everyone and is an explorable area. Inside the cave are a Weapon and an Armor Requisitioner that sell Rare armor and weapons with looks unique to the Order.

Inside the antechamber is a large rotating globe known as the Order Threat Assessment Board, and an asura gate with restricted access that leads to Fort Trinity.

The Chantry of Secrets is hidden inside the Deadend Cave on Stormbluff Isle, located in Bloodtide Coast. There are two additional methods of access:

Sanctum of Secrets — — Note that this counts towards the "Krytan Explorer" achievement track. 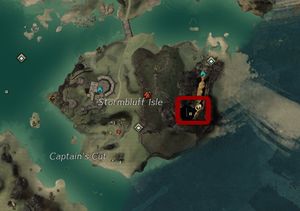 Location of the entrance.

These merchants do not show the merchant map icon. They are found in the Sanctum of Secrets (through the portal to the left when entering the chantry). The Sanctum of Secrets becomes accessible only after completing the fifth step of the personal story of a character who joined the Order of Whispers.

Little is known about the true extent of the order's activity, but the larger chamber contains clues to various activities:

Some clues also indicate surveillance of other countries such as Cantha, and possibly Elona.

Maps of the following are present inside the large chamber:

The Order seems to use advanced technology, such as:

Anomaly:
The mass-printed maps inside Large Chamber are mirrored and refer to the old topography of Tyria (as seen in Guild Wars).
Retrieved from "https://wiki.guildwars2.com/index.php?title=Chantry_of_Secrets&oldid=2579001"
Categories: