This article is about the method of transportation. For other uses, see Asura Gate. 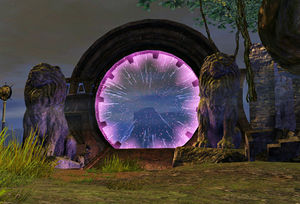 ) are a method of transportation developed by the asura. They provide instantaneous transport between two points of space. Users step into the gate at one end and immediately emerge from the other end. Unlike waypoints, travel by asura gates is free.

- Asura gates as displayed on the map.

- Asura gates to starting areas when under level 10 as displayed on the map.

The first asura gate network was constructed with the Central Transfer Chamber as its main hub and only source of power. The magical energy used to power the gates was radiated from what was then believed to be a dragon statue. Later, it came to light that the dragon statue was the actual dragon Primordus. When he awoke and left, destroying the Central Transfer Chamber in the process, the asura network was crippled. 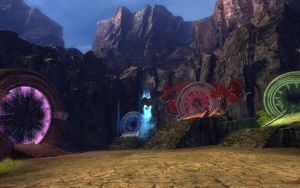 Before becoming operational, asura gates must be tuned to a specific location. The longer the distance between the two points, the more energy required for the process. Because of the extreme expense and effort involved, asura gates are rarely retuned.[1]

Gates are managed by asuran gatekeepers who set the rates and handle payment, while gate operators ensure the gates stay functional. Even though gate travel for players is completely free mechanically, lore-wise asura gates cost a fee to travel through similar to waypoints, along with shipment fees based on how much cargo passes through them. Because these gates are critical for travel and shipment throughout Tyria, users have no choice but to pay what the asura ask, which many merchants resent.

Though the asura gates are owned by the asura, the local government where they are erected regulate gate travel. This includes the seizure of illegal assets or items contaminated by the corrupting magic of the Elder Dragons, such as objects from Orr or the Dragonbrand. In order to continue to be able to do business, gatekeepers cooperate fully with the local laws and will not allow their gates to be used for any purposes that are illegal on either of the endpoints - though some gatekeepers can be bribed to tuning the gates to different locations than normal.

Broken gates are located throughout Tyria, most often with no clues as to their destination. There are broken gates located in the Michoan Marsh area in Metrica Province. One broken gate that can be reactivated is Parnna's Gate, which can be repaired and gives access to Calx's Hideout.

The gates in Coriolis Plaza in Lion's Arch were inactive for a long time, until Scarlet Briar attacked Lion's Arch, and destroyed the pillars where the former gate hub was located (south-southwest of central plaza). While these gates were being repaired and tuned, the gates in the 5 main cities linked to a section of Vigil Keep.

There are other gates scattered throughout the world. Several of them link to other areas in the same zone, while others are inert or still being tuned. One gate being tuned is in Goldenlight Hallow, while various gates are scattered around Ulta Metamagicals. These gates generally let monsters out, but cannot be entered.