This article is about the zone accessible during the Queen's Jubilee and the Festival of the Four Winds. For the area within Divinity's Reach, see The Crown Pavilion. 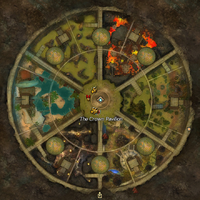 Map of The Crown Pavilion

The Crown Pavilion is a zone located below the Crown Pavilion area in western Divinity's Reach. It was originally introduced as part of the Queen's Jubilee release and repurposed as content for the Festival of the Four Winds. The primary draws to the zone are the Boss Blitz and Queen's Gauntlet activities.

The zone does not have vistas, hero challenges, or renown hearts and does not count for map completion. All characters are adjusted to level 80 while in the zone.

The zone is divided into six slices of a circle, divided by walls and a central platform. The center acts as a hub to each slice and contains a merchant, repairs, Festival Rewards Vendor and a Sovereign Weapon Vendor. Each slice has an associated theme, making references to various races and organizations in Tyria. Destroyers have suitable molten environment, pirates have beached ships, and so on.

Each slice features an event with a legendary foe, whose defeat contributes to the Boss Blitz group event. Once the Boss Blitz starts, six events will pop up, the players have to strategically split up in order to defeat them all. All the slices contain a high density of foes with quick respawn rates, with the events spawning even more enemies while active.

Once known as the Great Collapse, the Crown Pavilion was transformed in to a gladiatorial arena in honor of Queen Jennah's jubilee and as a celebration of the human spirit to fight and endure. The arena has a circular layout, divided into six slices, with each having a corresponding theme. Enemies in the zone are watchknights under an illusion. Upon defeating an enemy, the illusion will be unveiled to be a watchknight. The Crown Pavilion re-opened during the Festival of the Four Winds to aid in the effort to rebuild Lion's Arch, and returned later to aid in the Zephyrite's recovery.

1 Added during Festival of the Four Winds 2021. Only visible to a character who has completed Champion's End.

For previous dialogue, see: The Crown Pavilion (zone)/dialogue
Upon approaching Queen Jennah (one of these sets)
Queen Jennah: Welcome, everyone. If you haven't, I encourage all citizens to visit our Zephyrite friends on the Labyrinthine Cliffs.
Queen Jennah: The Festival of the Four Winds belongs to all of us; it is a reminder of the heights we can achieve together.

Queen Jennah: I hope you're enjoying the refreshments. The Zephyrites brought them all the way from Elona.
Queen Jennah: The Festival of the Four Winds is a fine opportunity to reflect on our past victories.
Queen Jennah: From the ruins of Dry Top to here, we've come so far together. It's important to celebrate this.

Queen Jennah: I trust that Tyria's finest will all wish to test their mettle in the Queen's Gauntlet this year.
Queen Jennah: And while it may seem you stand alone in the arena, your brothers and sisters in arms are with you in spirit!

At the Gauntlet arenas, when players enter the Queen's Gauntlet
Announcer: We have a new challenger!

Announcer: Here's an up-and-coming fighter, back for more.

Announcer: This competitor continues to impress, but can they keep it up?

Announcer: Always a pleasure to welcome this veteran contender back to our arena.

Announcer: You know this superstar by now. Let's hear it!

When time runs out for players in Queen's Gauntlet
Announcer: Our challenger better wrap things up quick. (with one minute left)

Announcer: Not much time left. Can our challenger make it? (with thirty seconds left)