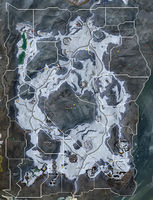 The Dredgehaunt Cliffs were once the domain of the dwarves, but when that race went down into the depths, the mole-like dredge claimed these lands as their own, and battle with the jotun, the grawl, and the norn for control.

Lying directly south of Hoelbrak, Dredgehaunt Cliffs overlooks old dwarven mines and settlements, now contested by the Durmand Priory doing research on the dwarves, and the dredge who seek to undo all things dwarven. Aside from the dredge who can be found in the south, the jotun make up the second majority of hostiles in this area, mostly in the eastern parts, as well as the Sons of Svanir menacing the norn in northern areas.

Gullik Oddsson once defeated a group of destroyers in Dredgehaunt Cliffs.

Almonds in Bulk from Disa

Cherries in Bulk from Disa