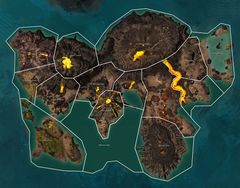 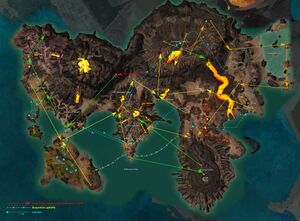 Ember Bay is a zone in the Ring of Fire Islands. Primordus has made his way to the region, bringing with him a new swarm of Destroyers enhanced with both death and plant magic. In response, the asura have sent research and investigation teams via their gates at Rata Novus. Other denizens of the area include a marooned human carnival troupe, a scratch of pirate skritt, and the jade construct guardians of an ancient mursaat fortress.

The zone introduces a modified version of renown hearts, which reset daily and can be re-completed for further rewards. Ember Bay also features Thermal Tubes, which require the new Thermal Propulsion mastery and blasts users to a location a large distance away.[1]

Like most of the Living World Season 3 zones, Ember Bay is not directly connected to neighboring areas. In order to reach it, one can use one of the following methods:

Coconuts in Bulk from

Black Beans in Bulk from

Rice in Bulk from