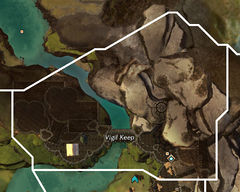 The Vigil Keep is the main base of operations for the Vigil, and is located north of the Vigilant Hills within Gendarran Fields. The Vigil Keep acts as a barrier to the north and the fort protects the river running south into Lion's Arch. During Scarlet Briar's attacks on Lion's Arch in 1327 AE, the Keep served as a central hub, replacing the decimated city. After Scarlet's death, the city of Lion's Arch retook its role as a gathering place for any refugees affected by the destruction.

In Vigilant Hills take the eastern road. It will lead to a bridge leading to Vigil Keep.

Vigil Marksman: Don’t you miss your warband?
Vigil Crusader: No. This is where I’m needed.

Crusader Brent: I thought you'd want to know that we received another request from Durmand Priory researchers for some muscle.
Tactician Michael: What rotten timing. We just can't spare anyone to go play bodyguard while they dig up a bunch of artifacts.
Crusader Brent: It's for a team researching ways to fight the corruption. They're going deep into dangerous territory and thought the Vigil might want in on it.
Tactician Michael: I guess it's important, then. I'll put the request through.

Tactician: Where's the warmaster? I need to see him about gear for the troops going to the Dragonbrand.
Vigil Crusader: Check the armory. I saw him heading there a while ago.

Recruit Hetty: I'm itching to get some field work.
Tactician Senna: Slow down, kid. It sounds like fun, but truth be told, it's damn scary out there. And you can't save lives if you're dead.

Recruit Morley: I'm an orphan. I've got no family, and now thanks to the centaurs, I've got no home. I figure, if my life's not worth anything, I can do whatever I want with it.
Recruit Morley: (sigh) Might as well die fighting the dragons, maybe do some good.
Crusader Terrell: Don't be ridiculous. You're in the Vigil. That means you've got a family and a home. Don't die to fight the dragons. Live to save lives.

Addam: Look, I'll sweep up. I'll run errands. I'll do whatever you want.
Warmaster Yosif: Your eagerness is inspiring, but Vigil members must be adults.
Addam: Aww, come on. I won't eat much. You can use my rations to feed the hungry.
Warmaster Yosif: Such sacrifice in one so young. I'll talk to Soulkeeper. Maybe you can clean some weapons.
Addam: Yes!
Warmaster Yosif: Small weapons.

Vigil Marksman (1): What if we face Zhaitan and its minions in Orr and we aren't ready? What's plan B?
Vigil Marksman (2): Plan B? We fight until it's either us or them left standing. It will be glorious.