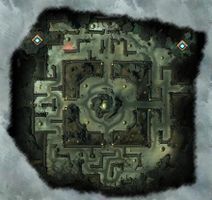 The Mad King's Labyrinth is an area in the Mad King's Realm that's only accessible during Halloween. It uses the same layout as the Lunatic Inquisition activity and contains multiple Halloween creatures, Haunted Doors, Carving Pumpkins, and Raw Candy Corn veins.

Anomaly:
Haunted Doors in the decorated festival areas outside of each race's capital city will send you to the northwestern waypoint, despite having the appearance of

On both sides, players can use a stone portal near the Lunatic Boatmaster to teleport down into the actual labyrinth.

These services are summoned by Mad King's Steward:

(All foes above level 80 are spawned by events.) 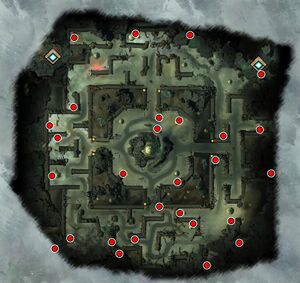 Locations of Carving Pumpkins in the Mad King's Labyrinth. 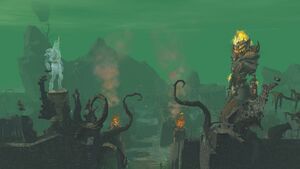 The King and the ghost of Palawa Joko, towering above the labyrinth as they argue.

Mad King Thorn: My greatest rival...Palawa Joko.
Mad King Thorn: I suppose you were killed for real this time, hmmm?
Palawa Joko: My, my, Oswald! Are you beginning to wilt? A few centuries in this void of misery has done very little for your complexion.
Mad King Thorn: And you look a bit...pale, dear Palawa. You could use a tan. Or some flesh.

When Madame Cookie appears somewhere
Madame Cookie: I'd just gotten used to Thorn's banter, but now I have to listen to that undead sack of dragon bile as well? (coughing) ...Hairball.

Madame Cookie: Neither of these fools know what it means to bring a landscape to ruin. I was birthed from chaos.

Madame Cookie: I just want to sleep and make the most of my forced retirement.

Madame Cookie: The bindings that keep us trapped in this realm are surprisingly...formidable.

Madame Cookie: I brought ruin to thousands! I leveled cities and destroyed civilizations...and yet, here I sit.

Madame Cookie: Everyone keeps offering me treats. I miss the stench of rotting carnage.

Madame Cookie: I once had talons the size of castles! Now I am a cat. 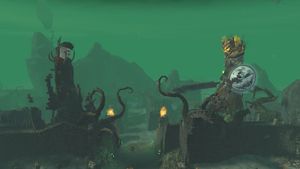 The King and the Prince, towering above the labyrinth as they argue.