This article is about the creatures. For the prefix, see Celestial. 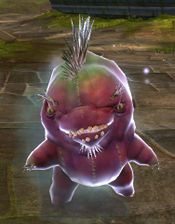 Celestials are the physical embodiment of the spirits of the stars. They are made of the starlight that shines down on the world, though some of them can have golden or material appearance. As such, celestials are not fleshy creatures, though they can engage in combat. During the Lunar New Year festival, they visit Tyria to test mortals, accept their offerings and bestow them with luck.

Canthans revere the Great Celestials. Stories surrounding the four cardinal Celestials reveal that they appeared to have once been human but later became the embodiments of the stars. According to Canthan folktales, at least the Celestial Pig had once been human as well before the Six Human Gods elevated him to become a celestial.[1]

During the Canthan New Year, that year's associated Celestial is said to bring the new year with it. Skilled chefs prepare meals to please the visiting Celestial and thus ensure good fortune for all Canthans. Local tradition expects the emperor's subjects to don ceremonial headdresses and dance with the great Celestial to drive off bad spirits for the coming year.[4]

The feat of defeating the avatars of the four cardinal Celestials has historically been the test one must pass to become Weh no Su, the Canthan equivalent of Ascension. The location of these trials and of the overseeing Oracle of the Mists moves periodically, requiring one to seek out the Oracle's adepts to find out where the sage currently resides. When an avatar is destroyed during the trial, its essence will spread and create smaller celestials that will endlessly return. Fights with each avatar become significantly more difficult as the ascendants face not only the remaining celestial avatars but the essences of those they have already defeated, as well as the celestials' guardians such as a group of celestial tengu.[2][5]

In Cantha, humans associated each animal with a specific set of virtues. Canthan folktales tell how a man named Chong embodied the virtues of honesty, tolerance, and support which were traditionally associated with the pig during the time when humans first walked the world of Tyria. When the end of Chong's years came, the Six Human Gods wished to elevate him as a celestial animal. Because Chong shared his virtues with the humble pig, he chose that as his celestial form and became the Celestial Pig.[1]

In the aftermath of Emperor Angsiyan's death and the subsequent Jade Wind in 872 AE, the Empire of the Dragon was on the verge of collapse. The emperor's son and successor Hanjai prayed to the ancients for guidance, to seek a way to reunite his people and restore glory to the troubled lands. His prayers were answered in the form of a mighty celestial dragon that swooped from the heavens and assured him that Cantha would rise once more. The inspired Hanjai poured every ounce of his blood, sweat, and tears into achieving that goal by bringing Canthans together via offering refugees a place to stay in within Kaineng City, making the land as safe as he could in the aftermath of the Jade Wind, and restoring leadership. The Celestial Dragon was regarded as the figurehead of the Empire of the Dragon.[6]

In honor of the Celestial Dragon that had guided him, Hanjai restored the lands of the Empire of the Dragon. That reverence led future emperors to celebrate the Dragon Festival as a reminder of the empire's guide and protector. The emperor and his subjects would bow their heads in respect as they prayed for the blessings of the celestial dragon while invoking the Celestial's name.

After the Ascension of Kormir in 1075 AE, Canthans began revering both the Celestial Dragon and the goddess Kormir during the final prayer in the Dragon Festival finale. Emperor Kisu attended the festival each year at the Shing Jea Monastery, honoring the two spiritual entities as well as the heroes who had helped vanquish threats to Cantha.[6]

Traditions of both the Dragon Festival and the Canthan New Year would carry over to Central Tyria centuries later. Inspired by the Pact's victory over the Elder Dragon Zhaitan in 1325 AE, Captain Hao Luen of the Captain's Council reimagined Tyria's version of the Canthan Dragon Festival as Dragon Bash, a festival to celebrate the defeat of the Elder Dragons, in Lion's Arch in the same year although the festival lacked any mention of Celestials.[7]

After the Great Collapse had been turned into the Crown Pavilion in 1326 AE, the Krytan capital of Divinity's Reach had activities centering around Lunar New Year to celebrate the Canthan New Year there. The festivities would evolve over the years and eventually include the Celestial Challenge in which contesters would be empowered by various celestial boons to carry out various tasks and battle what appeared to be celestial minions in order to earn good fortune and rewards.