In my short life, you've taught me the most important lesson. Friends will go through anything for each other.

Magister Sieran is a member of the Durmand Priory, as well as a skilled elementalist who appears to specialize in water magic. 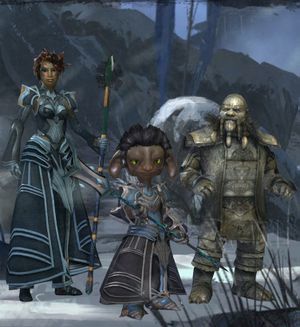 Magister Sieran is first introduced in the Dredging up the Past storyline for Durmand Priory members. Players will receive a mail from Sieran, telling them to meet her in the Black Lion Trading Company HQ in Lion's Arch. She mentions that she has been assigned to escort the newly-joined players to the order, a role she later reinforces as a mentor.

The players find Sieran at the Trading Company HQ, who can be seen speaking to Kekt, who warns her that her duties are to take the novice - players - to the Durmand Priory. She quickly dismisses her duty, mentioning a "little side-trip". Afterwards, she welcomes the player, introducing herself as a "Magister of the Order". She claims that Kekt told her about a curious dwarven tomb at Molent Summit. Despite being ordered by both Steward Gixx and Kekt, she decides to go for it, joined only by the player character. Her signature phrase, "it'll be cherry!" is first heard in this instance.

Once there, she notices dig marks, and realizes that dredge have already found the tomb, and are likely going to destroy it, as the two races hate one another. The party soon comes across a group of Priory Explorers, kidnapped by the dredge. After breaking them out, Sieran lies to them, saying Gixx sent her, in order to cover up her unplanned investigation. Once Directorate Chief Spalaxinov has been defeated, the group finds out about a magical sword made from blood. The dredge could not destroy it, and have taken it to the southern ruins, trying to find a way to destroy it. She decides to go to the Priory, in order to have the writings on the dwarven relics translated by the intelligent Gixx himself.

At the order's headquarters, Gixx yells at Sieran, furious at her lack of care about safety of herself and the player. However, since she freed the priory explorers, he decides to go easy on her; putting her and the player on probation. After he has translated the relics, Gixx discovers that the dredge have taken the Sanguinary Blade, a powerful artifact made of frozen dragon blood. He orders Sieran to retrieve the sword in order to prevent its destruction at the hands of the dredge.

Players join Sieran in the Bad Blood storyline, in which they are tasked with retrieving the sword at the ruins north of Mistriven Gorge. After passing through the windy cave, riddled with traps, the group discovers that the sword has been taken by the dragon-worshiping Sons of Svanir. Steag Frostbeard corrupts his comrade with the sword, turning him into an icebrood creature. Once he has been dealt with, Sieran offers players a choice: either find the sword's original scabbard or build a containment device powered by the priory's knowledge.

Regardless of the player's choice, Sieran and the player arrive at Black Barl's Mill, where Steag and the rest of the Svanir are hiding. Sieran tries to reason with them, but to no avail. Steag corrupts his allies, transforming them into icebrood. Afterwards, the group takes the sword back into the priory's custody, and are removed from probation, furthermore, the player is promoted to the rank of explorer. Gixx decides to give the group a new task - research one of the minor races of Tyria, and work on recruiting them for the battle against the dragons. Sieran admits that she thought mentoring would be a boring task, but she was reassured once she witnessed the player's willingness to try out new things.

Sieran offers players a choice of recruiting one of the five minor races of Tyria, depending on the character's race - the skritt, quaggans, the hylek, the grawl and the ogres. Dependent on the player's choice of racial sympathy, five different storylines split the personal story.

The Battle of Claw Island[edit]

The story continues at the Durmand Priory headquarters where Gixx promotes the player to the high rank of Magister, much to Sieran's delight. Afterwards, Gixx orders the group to go to Lion's Arch, and talk to Maeva, who has offered the Priory new research material that might be of use in the fight against the dragons.

Sieran meets the player in the Western Ward, in front of Maeva's house that seems to be on lockdown. Once inside, and after they've dispatched the security golems, the group discovers that Maeva is stuck inside a time loop, a means of defense she lifted against the Undead Scout that attacked her home. After freeing Maeva, and destroying the intruder, she informs the group that an attack on Claw Island is imminent. Realizing the importance of the naval fort, the group sets out for Claw Island in an attempt to warn its army before it's too late.

Once there, Sieran and the player quickly make their way to Commander Talon, a prideful charr in charge of the fort at Claw Island. Confident in his defenses, he dismisses the group's warnings, claiming that his army would know of an imminent attack. The group also meets up with Trahearne, a scholar with a distinct knowledge in the lands of Orr. Being a sylvari himself, he greets Sieran, who admits that she considers him a personal hero. The two strike up a conversation, but are soon interrupted by a weak attack on the shores of Claw Island.

Just as Commander Talon's army was getting comfortable, a larger attack strikes the fort, followed by heavy attacks at the front; the heroes retreat into the safety of the inner section. While under fire, Talon suffers mortal injuries and quickly dies, as the heroes are backed up into the corner. With nowhere else to go, Magister Sieran realizes that her duty is to hold off the risen, until the group can evacuate to Lion's Arch.

Despite the player's warnings, Sieran sacrifices herself to the risen horde, effectively preventing their attack on Lion's Arch, saving the lives of many, at the cost of her own.

In the aftermath of the battle of Claw Island, the player met up with Steward Gixx at the Moran Memorial. Still in shock over Sieran's sacrifice, Gixx admitted that, despite all of her flaws, he considered Sieran a hero, who essentially gave her life in order to save others. Sieran's death was eventually avenged when the three orders and their allies retook Claw Island and slew Blightghast. In the conclusion of the Pact's campaign in Orr, Marshal Trahearne honored Sieran's sacrifice by engraving her name onto the Pact Memorial, which listed all of the fallen in the battle against the Elder Dragon Zhaitan.

Greets
Welcome.
Greetings.
How can I help you?
I have much to teach.
There's always more to learn.

Disengage
That was interesting.
A fitting end.