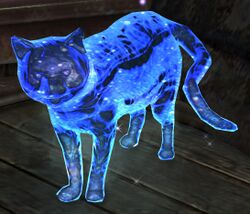 Astral creatures are beings of unclear origin and properties. Most of them can be found deep within the Mists, though some have been found within dwarven ruins deep underground.

Their skin often resembles a star field, or in some cases the surface of planets as seen from space, creating an otherworldly appearance. Locations with similar attributes have been associated with being on the edge of Tyria.[1]