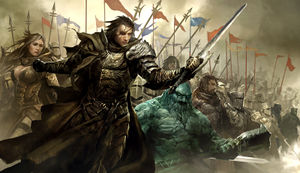 A stone dwarf joins human allies in a battle against Zhaitan's Risen.

As a race of flesh and blood, we became extinct over 200 years ago. We made a great sacrifice to defeat the destroyers, servants of the Elder Dragon Primordus.

— Ogden Stonehealer in Assault the Hill

The dwarves are a near-extinct race of short, stout humanoids that once inhabited the Shiverpeak Mountains. They have since become creatures of stone, rather than flesh and bone, and act as guardians of the Depths of Tyria, fighting the destroyer minions of the Elder Dragon Primordus and denying them passage to the surface. As such, few are ever seen.

Unusually, the physiology of the dwarves can be separated into two distinct eras: pre-transformation, and post-transformation. Pre-transformation dwarves were stocky, hairy humanoids of flesh and blood. They were usually gruff in nature, and known for their strength and resilience in battle, as well as their nimble fingers as craftsmen. Male dwarves were never seen without beards, and while females existed, none were ever seen—or rather, seen and differentiated from the males.

After the Transformation of the Dwarves, dwarven biology changed significantly. The race became creatures of undying stone, linked together by a kind of collective consciousness that gives them purpose. They are immortal in the sense that they do not die of old age or disease, but can still be killed by other means. From the transformation, their minds have been altered on top of being linked together, driving them to fight the destroyers with unyielding fervency. 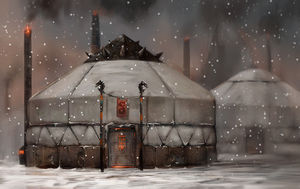 Pre-transformation, the dwarves were a society centered on mining and smithing, ruled by a monarchy. In the years leading up to the Transformation of the Dwarves, the dwarven nation, called Deldrimor, came to be challenged by the xenophobic Stone Summit, a group with such an extremist ideology that it effectively split dwarven culture.

Some dwarves were known to revere the human gods Dwayna and Grenth. Although this was much less common, there were dwarven members within the Church of Dwayna. There was also a sect of dwarves known as the Brotherhood of the Dragon, who maintained a connection with the dragon prophet Glint by letting her into their minds.[2][3] The Brotherhood's devotion to Glint had led other dwarves to think they were worshiping Glint instead of the Great Dwarf; however, the Brotherhood viewed their relation to Glint as practical rather than religious.[4]

The Stone Summit had members who worshiped the Great Destroyer, the archnemesis of the Great Dwarf according to dwarven legends.

The nation of Deldrimor was ancient by the time of its fall, seeing centuries of kings as leaders. Deldrimor had spent many years building up relationships with the nearby human kingdoms of Ascalon, Kryta and Orr, and were on good terms with them, allowing them passage through their lands. Although the dwarven kingdom did not extend as far north as the Far Shiverpeaks, there were scouts and exiles that were known to reside there, putting them in contact with the norn. The dwarves also sometimes worked with the subterranean asura, before the destroyers forced them above ground.

The Stone Summit, on the other hand, believed that it was the right of the dwarves to rule above all other races, and advocated the killing or enslavement of the nearby non-dwarves. Ruled by Dagnar Stonepate, a cousin of King Jalis Ironhammer, their ultimate goal was to conquer Tyria.

As one of the so-called "elder races" of Tyria, the dwarven race is at least 10,000 years old, and was present during the last rise of the Elder Dragons.[5] They did not aid their allies—the Forgotten and the mursaat—in the assault on the Elder Dragon Zhaitan, which made the mursaat bitter towards them.[6]

Few records exist from this time, however, with one of the primary sources of information being the Tome of the Rubicon, a document purportedly written by the Great Dwarf himself. According to this tome, in ancient times the Great Dwarf had faced down a creature of vast power and limitless evil, the Great Destroyer (now understood to be a champion of the Elder Dragon Primordus, and was but one of many Great Destroyers). The Tome also foretold of a future, final conflict between the Great Dwarf and the Great Destroyer, in which the dwarves would be "forever transformed". Upon being freed from dragon corruption by a Forgotten ritual, the dragon Glint shielded the surviving races of the world as the Elder Dragons fell to slumber, thus allowing them to begin their civilizations anew.

Many years ago, far to the south in Cantha, relics of a mysterious race, possibly an offshoot of the Deldrimor dwarves, were uncovered in the Aurios Mines of the Jade Sea. This is the only indication of any dwarven presence on the southern continent, and remains unexplained to this day.

According to Magister Sieran, the dwarven civilization lasted more than two thousand years, which would put the founding of Deldrimor and the building of structures like the Windy Cave at 675 BE at the latest.

In the years prior to 1072 AE, the dwarven nation was split into two: Deldrimor and the Stone Summit, led by King Jalis Ironhammer and his cousin Dagnar Stonepate, respectively. This divided the dwarves into a civil war, which came to an end in 1072 AE with the death of Dagnar Stonepate in Thunderhead Keep and the re-conquering of Sorrow's Furnace. The surviving Stone Summit members were exiled into the Far Shiverpeaks.

Before their defeat, the Stone Summit unearthed the Tome of the Rubicon in Sorrow's Furnace. An expedition led by the Deldrimor High Priest Alkar was able to recover it before it could be read, and the book was rewritten and sanitized before it could be looked upon by ordinary eyes.[7] In 1078 AE, the prophecies detailed therein came to pass when earthquakes wracked the world and destroyers began appearing on the surface.

A forward scout, Ogden Stonehealer, was sent forth to forge an alliance with the norn of the Far Shiverpeaks. Convincing the individualistic norn to fight as a unified force proved to be difficult, but the promise of the destroyers as the greatest hunt of all enticed a number of them, including Jora and Olaf Olafson. In the process, Ogden and the heroes accompanying him were able to gain the support of the asura, who were themselves fleeing the destroyers, and the Ebon Vanguard who were stationed near the Blood Legion Homelands.

Not long after the dwarven armies arrived in the north, the location of the Great Destroyer was discovered. The Hammer of the Great Dwarf was recovered from a secret location in the Heart of the Shiverpeaks, allowing King Ironhammer to cast the Rite of the Great Dwarf. As the prophecy foretold, the dwarven race was transformed into something new, and with strengthened body and renewed purpose they charged into the depths, into their final battle.

After the Great Destroyer's defeat, the last hierophant of the Stone Summit, Duncan the Black, pulled all his resources to obtaining the dead Great Destroyer's power. His plans were found out, however, and he was challenged by norn and adventurers alike before falling in battle in Slavers' Exile.

At some point before 1078 AE, Vlast, the first of Glint's scions, was born. He was intended to play a large role in Glint's legacy, her plan to preserve Tyria's magical balance by replacing Elder Dragons with equally powerful but less predatory entities. Destroyers came for Vlast during Primordus's first rise, but he was protected by the Brotherhood of the Dragon inside a fortress, a tiny shard of sand within the massive Crystal Desert.[8]

Section-stub. This key section of the article is incomplete. You can help the Guild Wars 2 Wiki by expanding it.
Reason: Update with recent events from personal story onward, including cited sources.

The fight between the dwarves and the destroyers consumed the dwarven army sent to fight the Great Destroyer. Few returned to the surface to tell the tale of their victory—and those who did had been transformed into stone with altered mentality. During this time, most of the remaining Stone Summit rejoined what remained of Deldrimor, and the two communities lived together in peace once more.

However, about fifty years after the Rite of the Great Dwarf was first performed,[9] the last of the flesh and blood dwarves felt the call to undergo the Rite themselves.[10] Now, no longer interested in maintaining their solidarity as a race, the last dwarves scattered across Tyria, finding battles to fight in the deep caverns or making new homes in far-flung hills, ever-watching the borders where caverns emerge into the surface world. The stone dwarves of the Brotherhood of the Dragon left Thunderhead Keep to their successors—the Zephyrites and the Exalted—to take care of the forges there in preparation for Glint's prophesized legacy to be fulfilled for the salvation of Tyria.[3][11]

The few individuals who can rightfully claim to have met a dwarf in their lifetime are rare, and all speak of the strange, driven passion that consumes these few survivors. It remains unclear how many dwarves survive in the present day.