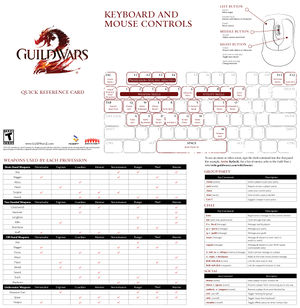 This article is about the game controls. For the combat mechanics, see Control.

Controls are functions used by the player to open menus, activate skills and abilities, and otherwise allow the character to interact with the game mechanics. Key-mappings, or hot-keys, are shortcuts that allow the player to quickly access or open skills and windows. The following list is the current listing of hot-key options at their default settings. Those listed as Unassigned do not have a key mapped to that action by default. All of the following actions may be mapped to different keys by the player allowing for the player to customize the shortcuts to their own preferences. Currently, mouse camera controls can not be remapped and are limited to the left and right mouse click buttons, except when action camera is toggled on.

Bug:
While the notes for the August 2, 2022 patch state that the keybinds were updated for new accounts, they were also changed for some existing accounts. If you're experiencing any issues with your controls (e.g. after returning to the game from a break); consider verifying that your keybind settings are still as you're expecting them to be.