This article is about the historical figure. For the Revenant legend, see Legendary Centaur Stance. 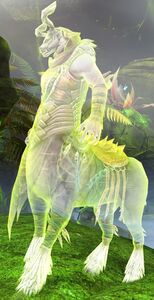 Ventari was a centaur who planted the Pale Tree with Ronan in what would become the Grove. He etched the tenets of his philosophy upon Ventari's Tablet before passing away. The Pale Tree used the tablet to teach morals to sylvari, ensuring that Ventari's legacy lives on.

Ventari was an elder of the Harathi centaurs who once lived in the Maguuma Jungle. In his youth he was a proud warrior who fought against humans, however over time he grew to abhor the violence that engulfed the two species. He eventually set up a camp beneath the largest Stonewood tree in the arid tops of the Maguuma Jungle.

However, in 1072 AE, violence once more engulfed Ventari's home in the form of the Krytan civil war. To escape the conflict, Ventari fled south, to the Tarnished Coast, where he befriended a human named Ronan, with whom he planted the Pale Tree and founded a sanctuary of peace for all races seeking it that would eventually become the Grove. Along with Ronan, and after the human's death, he raised and nurtured the tree.

Ventari died in 1180 AE, having written down his life experiences on an artifact that would later be known as Ventari's Tablet and placed it at the foot of the Pale Tree. In 1302 AE, the Firstborn of the sylvari sprouted forth from the tree, and most of the race now holds Ventari's views in high regard.

Ventari's teachings are also highly similar to those of the Maguuma centaurs, an offshoot of the Harathi that believe in peace. Despite this resemblance, and their current leader Ehrgen Cragstrider sharing names with one of Ventari's followers, Ehrgen Windmane, the Maguuma centaurs claim ignorance about Ventari.

Forging serenity within the heart is more difficult than any physical battle.
I did not know that such a small seed could begin such a very large journey...
Life can be painful, but do not fear the trials you will face. Hard ground makes stronger roots.
Live well and fully, and waste nothing. Each day is a gift.
You cannot expect the world to give you peace. You must find it... within yourself.
Never leave a wrong to ripen into evil or sorrow.