This article is about the mechanical aspects of the player's character. For the lore aspects, see Pact Commander.

A character is a customized avatar of the player in the game. Once created, the player uses the character to participate and progress through any of the three major game modes: Player versus Environment, Player versus Player, and World versus World. The number of characters on an account is limited by the number of slots available for character creation. They are the main protagonist in Guild Wars 2.

Players are guided through a 10-step character creation process where they determine their character's characteristics: race, gender, profession, physical appearance, initial biography, and name. Players can later change some aspects of the character through means of purchasing a Total Makeover Kit, a Name Change Contract or Identity Repair Kit from the Gem Store. Race or profession cannot be changed by any means. Some physical appearances are exclusively available through a makeover.

Once created, information about the character can be accessed through the hero panel. This panel also allows further customization through the character's choice of dye and equipment obtained while playing the game.

Characters advance throughout the game by gaining experience until they reach the maximum level cap of 80. Almost every in-game activity provides experience (including but not limited to): 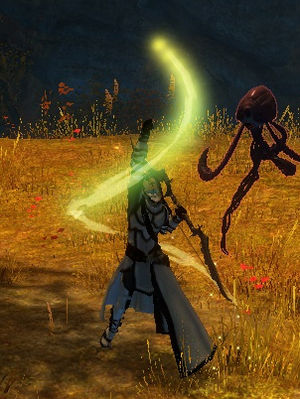 A character leveling up

When a character levels up, they are fully healed, they gain full adrenaline and life force, and if they are in combat they will also launch and damage nearby foes with the Level Up contextual skill. New abilities are unlocked and higher quality equipment become available at certain levels. Gaining a level gives the character equipment rewards, unlocks mechanics, and gives various game tips and guidance.

There is much endgame content designed specifically for players after reaching level 80.

Dynamic level adjustment is a game mechanic that automatically scales a character's base attributes to match the effective level of the current area. Level-based unlocks like skill slots and traits are retained.

The game discourages players from bringing characters into areas that are more than 10 levels above the current character level.

Levels of zones, enemies, hearts, and events more than 10 levels higher than the character are displayed in purple.

Non-player characters detect lower level player characters from a much greater distance than they would detect a character of equal level, and if they are hostile they will rush the character. Combined with the combat difficulties listed below, this makes even basic exploration of higher level zones extremely dangerous.

Characters more than 10 levels below the area level cannot do any of the following:

Lower level characters can still technically do the following, but as a rule of thumb it is unlikely and not recommended:

Additionally, damage is scaled by the level difference. A low level character will receive much more damage even with the same amount of armor as an appropriately leveled character. On top of this, all hits received will be critical hits. Similar holds true for outgoing damage. In addition to all hits being glancing blows as noted above, damage is further scaled down.

Every character has their own home instance. This is an instanced area which varies depending on race and changes as the character levels and completes various objectives in game.

While many aspects of the game are unlocked account-wide once completed or acquired, there are a few notable exceptions which can not be transferred to other characters: