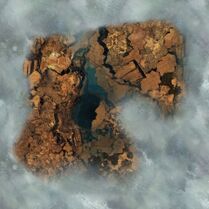 The Aquatic Ruins Fractal is one of the Fractals of the Mists that occurs at level 7, 26, 61 and 76.

The first step is to free two fishermen by killing all the krait surrounding each cell. After this, one of two possible paths will be open: the deep path or the dolphin path. The available path changes daily at 07:30. The dolphin path is accessible through the left while the deep path is accessible through the right. Once one party member makes it to the next checkpoint, party members may /gg or die, respawning at the next checkpoint. This often saves time for groups that are not familiar with the paths.

The darkness is full of Piranhas of the Deep, which damage players quickly. Light sources will prevent the piranhas from harming anyone within range. Luminous Plants provide a stationary light to players within range and also allow players Holding the Glowing Plant to have a mobile light. Taking the plant also removes the light source from the original location temporarily. Holding a plant also allows players to revive teammates and teleport them to the wielder. To find the path, follow the Mushrooms on the ocean floor. 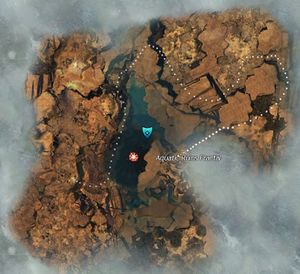 The path through the krait.

You are turned into dolphins without any offensive skills. Accordingly, avoid the krait as much as possible. Swim as a group and take your time. Using Echo will reveal hidden krait and little water "portals" that show you paths toward the next checkpoint. (You can also follow along in your mini-map.) Use Rush to dash quickly. Finally, Retrieve Ally is the main reason you stay grouped up with your party. A party member can sacrifice themselves to let the rest pass through an infested area. Hit Retrieve Ally while within 1000 range and they'll be instantly teleported to you, alive and well.

Getting through the cave without being caught will reward the player with the Flawless Fins Foil Foes achievement.

The beast can be defeated like any other boss: keep hitting it and deal with any summoned reinforcements. The boss will occasionally eat players near him, inflicting agony and dealing minor damage to the player and granting an effect that heals the Jellyfish Beast. While doing so, it is immune to damage until the affected players uses Struggle to break free. Pets and other minions will not break free automatically, and may take a while to die due to the attack's low damage, so avoid summoning minions that cannot be manually destroyed. If the pet is eaten, switch it for another pet.

After every 25% of damage the Jellyfish Beast takes, it will summon a number of Elite Krait Diviners (1 at 75%, 2 at 50%, 3 at 25%). The Jellyfish Beast will be invulnerable until the players take care of these Diviners. Also try to avoid the ascending bubbles as players will get stuck in them applying an effect that causes the player to float to the top of the area.

Entering the fractal
Dessa Observation Mode: This fractal's disturbance is coming from under the water. Dive in. And if you gut a few of those awful krait, all the better.

Talking to the NPCs
Fisher: I don't know where you came from, but I need your help. The krait took our people into the water. You have to stop them!

Starting the Dolphin Path
Dessa Observation Mode: Interesting. The krait magic is employing morphological properties, likely being used as a security system. Oh, you should probably be careful.

After finishing the fractal
Dessa Observation Mode: Outstanding aquatic adventuring. I don't know how you do it. I have a hard enough time in a bathtub. Anyway, the fractal's stable. Time to depart.

Fractals of the Mists
Retrieved from "https://wiki.guildwars2.com/index.php?title=Aquatic_Ruins_Fractal&oldid=2265683"
Categories:
Hidden category: