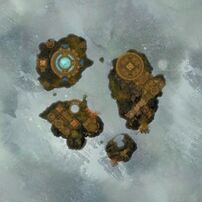 The Mistlock Observatory is Dessa's laboratory in the Fractals of the Mists. She claims to have made the laboratory to study the Mists and its ability to create the Fractals, but hostile forces prevent her and her krewe from properly studying the nature of the fractals. As such, she asks adventurers (or "hired help") to clear out the Fractals of hostiles (which she dubs instabilities) so that her krewe can traverse safely.

Initially, access to the Mistlock Observatory came from a Consortium-owned asura gate. This gate was intended to lead to Pearl Islet on Southsun Cove, but for unknown reasons it went haywire and instead led to Dessa's lab. She does not know it, and denies any potential connection to both the Consortium and Lion's Arch.

The Mistlock Observatory is a hub for players to spend their Fractal Relics, sell their loot and repair their armor after their adventures in the Fractals of the Mists.

Fractals of the Mists
Retrieved from "https://wiki.guildwars2.com/index.php?title=Mistlock_Observatory&oldid=2588895"
Categories: