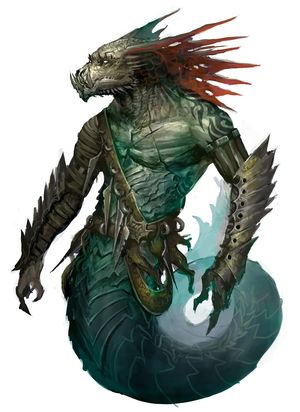 Originally from the Unending Ocean, the krait rival even the charr for viciousness and cruel ingenuity. These intelligent creatures are vicious and xenophobic, attacking and enslaving all other species on sight.

The krait are humanoid from the waist up, with a lizard-like head with protruding horns and scaly skin, and have snake-like tails. They prefer to live underwater, where their tail allows them to be flexible and excellent swimmers, but they are equally able to live on land and are reasonably mobile there. When they come close to death they enter a frenzy which shape-shifts them to another form, this gives them a second wind which makes them particularly difficult to kill.

The krait lay eggs in underwater hatcheries. When hatched they have three stages of existence: larval, adolescent, and mature. The larval stage is weak, fragile and poor at swimming. They are guarded until they are better swimmers and learn life skills. As adolescents they are used as scouts. Mature krait are stronger and are the steadfast fighters for which the species has gained infamy.

Krait are known to consume the flesh of their captive slaves which includes humans and other air breathers.[1] 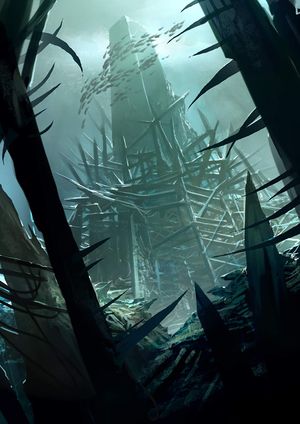 Krait are vicious creatures, completely uninterested in the needs or well-being of others. The krait have never felt threatened by any of the land or other sea-dwelling races. They believe other, lesser races have nothing to offer them, so the krait never bother to communicate with them. Never beaten, they are convinced that they are blessed and elevated: the superior species in the world. The krait will seize whatever they want for themselves — slaves in particular — with a ruthless efficiency.

Krait structures, known as deeps, stretch from the ocean depths to just above the surface. Their cities are often built around one or more of the great obelisks, elaborately built to incorporate coral reefs and natural caverns. The city usually contains underwater hatcheries, palatial living areas, arenas for gladiatorial combat, and long lines of glowing road markers which can be seen from the surface. Slaves are penned in small chambers at the top of the structures until it is time to be eaten or sacrificed. This top part is often built from shipwrecks or materials stolen from the land. The light from the slaves' cooking fires serve as warning to passing ships to be wary of the krait below.

Krait have never developed a written language but have excellent memories and are strong mathematicians. Both males and females are given education and battle training, and both genders perform all general societal functions.[1]

Religion is at the heart of krait society, and in turn, the obelisks are at the heart of krait religion. The obelisks are rare, eerily smooth stones made from a unique material found on the ocean floor. According to the Oratuss, the priesthood of the krait, the obelisks mark the sites of the "ascension" of ancient krait prophets to some higher realm, but land-based scholars speculate that they are simply ancient krait monuments whose purpose have been long-forgotten due to the oral nature of the krait's religious texts.

Krait doctrine foretells the return of the obelisks' prophets, bringing with them massive armies to flood the surface of the world and destroy other species. It is to these prophets that the krait sacrifice their slaves, believing that they will serve the prophets as they expand their otherworldly armies. The krait regularly use magical and mathematical means to attempt to predict the time of the prophets' return, but have yet to be successful.

Like their obelisks, all krait are steadfast and immobile in their beliefs. Their legends say those on land were driven out of the sea by the prophets and forbidden to return. This is regarded with a degree of skepticism by other races but the krait refuse to listen to such things and are happy to kill to ensure that the krait religion is not defamed. All krait are willing to die for the continuity of their species and for the cause of their prophets.

The religion of the krait is what allows the Oratuss to control the entire race. Religious "texts" followed by the krait are passed down verbally through these priests and priestesses. The vast length of the texts allows the priests, who have dedicated their lives to the texts, to make subtle changes to the wording and manipulate the interpretation of their legends to serve their purposes and support their power.[1]

Krait history, especially prior to fifty years ago, is still mostly unknown. During this time all that's known is their activities of enslaving shipwrecked sailors and that in 1078 AE, they already had a presence on the Tarnished Coast. Fifty years ago, however, they were forced out of the Unending Ocean's deepest trenches, their former homeland, by creatures opposed by the Elder Dragon Soo-Won.[2] During this time, they forced the quaggan out of the Unending Ocean as well, killing their royal family and, according to a Pastkeeper, their goddess Mellaggan herself.[3]

Reaching Tyria, they built towers from ship wreckage of the Sea of Sorrows, settling in the coastal bays and lakes surrounding the sea.

Nearing the end of the year 1326 AE, the Krait were unified and formed an alliance with a splinter faction of the Nightmare Court to create the Toxic Alliance, based on the promises made to them by Scarlet Briar who claimed to be able to offer them an audience with their prophet. In return for this, the alliance built a living Tower of Nightmares in the middle of Viathan Lake in Kessex Hills which spread poisonous pollen across Tyria. The tower withstood a siege by the Vigil for a whole month before it was finally destroyed by a fatal injection of antitoxin. Despite this, the alliance continued and played a role among Scarlet's other forces in razing and occupying Lion's Arch and deploying her deadly miasma which their tower helped to produce. The Krait involved in this alliance developed a sickly yellow glow as a result of their toxic pollution. 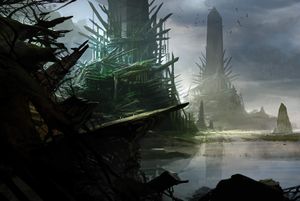