Sunqua Peak should be a peaceful place—suspended in a storm-lit sky, with beautiful stonework and flowering trees to mark the path up the mountainside. But something here is wounded, and the elemental spirits need your help to heal their home.

The Sunqua Peak Fractal is a fractal which takes place in Sunqua Vale, a Canthan location, at scales 25, 50, 75 and 100. The area is said to be a convergence of elemental powers. With the area in turmoil, the players are tasked with climbing the peak and bringing peace to the area.[1]

The Sorrowful Spellcaster casts multiple AoE attacks clearly telegraphed with circle and arrow indicators on the ground. When she casts AoEs around the players, everyone should spread out before they detonate to avoid getting hit by multiple AoEs. She also often dashes in a cardinal direction of the arena or back to the middle,

Launching players caught in her trajectory. When her breakbar is broken she gains

Resilient Form, which locks her defiance bar for 30 seconds.

Approximately 45 seconds into the fight, she will go to the middle and become invulnerable in a whirlwind shield as she summons a storm. To disrupt it, players have to jump to the energy sources indicated on the ground with red arrows. Players will need to get 3 charges of

Charged Leap in order to jump high enough to reach each of the 6 energy sources and lose all stacks upon dispelling a source. To build up stacks, players have to walk over the orbs that spawn on the ground. 3 Orbs spawn at north, east, south and west of the arena, and will not disappear to other teammates when picked up by a player. New orbs get spawned every 20 seconds. Throughout this phase, red AoEs will spawn at the location of players and will detonate after two seconds, dealing moderate damage. After 25 seconds of starting the attack, she will unleash a burst of energy on the arena (which can be dodged).

After dispersing the storm, the Sorrowful Spellcaster will come back to the arena and continue with the air themed AoE attacks and dashes, most of which inflict

Weakness. If not phased, she will summon a storm again every approximately 75 seconds after the previous one ends.

At the start of the phase she will leave the arena and call meteors with concentric circles indicating increased damage, stacks of

Agony the closer to the meteor when it lands and releases a firey shockwave. She will summon 2 meteors on opposite sides of the arena, then 2 opposite meteors at 90° of the first ones, and finally 4 meteors at 45° of the previous ones. She then comes back to the arena to cast an arena wide AoE explosion that can only be avoided by standing behind the remains of a meteor that is intact. Standing behind a destroyed meteor will not give any cover and any players caught in the attack will instantly down or lose

After this attack, the Sorrowful Spellcaster will continue with the AoE attacks and dashes, which are slightly different to the first phase as they are now fire themed and most inflict

Burning. If not phased, she will summon meteors again after approximately 45 seconds the previous one ends, but will skip straight to the final 4 meteors.

At the start of the phase she will go to the middle and become invulnerable as she channels the waters. Players will get pushed out of the middle and a total of 4 dark blue orbs will spawn on the arena one at a time, starting south and then counterclockwise. The closest person to it when it spawns will be tethered to it and continuously gain stacks of

Tidal Bargain. If someone intercepts the tether, they will be tethered instead. Reaching 10 stacks of

Tidal Bargain will instantly down the player or strip

Rigorous Certainty. Upon untethering all stacks of

Tidal Bargain are removed after 10 seconds. In addition, random players will get targeted with a small green AoE and when it detonates it will distribute the damage among the players within.

After the attack, the Sorrowful Spellcaster becomes vulnerable again and continues with the AoE attacks and dashes, which are now water themed and most inflict

Slow. A notable difference in this phase is that the AoEs with arrow indicators that move across the arena are now bigger in diameter. If not defeated, she will channel the waters again after approximately 40 seconds the previous one ends. This attack is different to when she first phased, though, as she will still be vulnerable to damage, she will cast multiple radial AoEs and players will get slowly pulled in to the middle, which reflects projectiles, constantly deals damage and applies 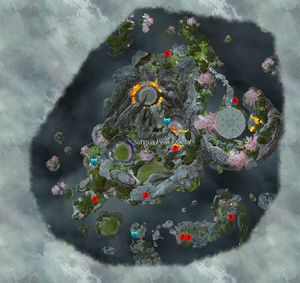 Map with all journals marked.

The Harbinger of Woe opens a portal and the party skips directly to the endboss, Ai, Keeper of the Peak, as the players have already learned the mechanics from the minibosses in normal mode. The Sunqua Peak meta achievement must be completed to interact with the Challenge Mote.

From 100 to 1% of the boss health the fight is mostly the same as normal mode, but mechanics are more punishing. The channeled element attacks are slightly different:

Ai is overwhelmed by her Doubt, Fear, Sorrow and Guilt. The arena turns dark, her health goes back to 100% and the fight resumes. The party can /gg here to skip the cutscene, make build alterations, and refresh their Mistlock Singularities (note that this removes

Achievement Eligibility: Dancing with Demons). The general mechanics and attack patterns from light phase persist, although Ai loses her elemental abilities and the fight consists of one long, uninterrupted phase.

During the second fight Ai will continue to cast multiple AoE attacks telegraphed with circle and arrow indicators on the ground and dash around the arena. The effects are now laser themed and apply

If not phased, 2 minutes after engaging and then every minute or so, she will go to the middle and start casting rings of circle AoEs. Four Fear enemies will spawn on the arena and

Fixate onto players, following them around for ~15 seconds until they expire. Players must kite these, as they are invulnerable to damage and will detonate if they touch a player,

stunning and dealing heavy damage to anyone nearby.

If a player fully dies, an enemy Doubt will spawn and attack the remaining teammates.

At the start of the phase and then every approximately 70 seconds, she goes to the middle and casts rings of circle AoEs. Shortly after she starts channeling, a stationary Sorrow enemy spawns with a breakbar that must be broken within 10 seconds or else it casts a deadly spell that deals massive damage to the entire party. Fears will also spawn as described in the previous phase after casting the rings of AoEs.

Like in the previous phase, at the start and every 70 seconds, she goes to the middle and casts rings of circle AoEs. Shortly after 2 Sorrows spawn in addition to a stationary Guilt enemy that tethers to the nearest player, giving stacks of

Crushing Guilt. If a player reaches 10 stacks they will down, so to prevent this other players should intercept the tether and share the burden. If Guilt tethers to Ai, she gains stacks of

Cacophonous Mind. Fears will spawn after the Sorrows are broken - kite them out and DPS Ai down to 1% to complete the CM.

Upon arrival
Spirit of the Mountain: Ah, great traveler! What fortune our destinies should cross paths on such a day!
Dessa: Ummm, nice to meet you?
Spirit of the Mountain: This mountain's natural balance is deeply disturbed. Please, quill its elementals and restore peace! You must hurry!
Dessa: "Quill"? Did she mean "quell"? If you're going to lay it on thick, at least use proper vocabulary...
Dessa: Moving on: We should deal with those elementals. They risk destabilizing the fractal.
Dessa: And fast. This place feels...odd, but sort of familiar? It's unsettling.

Before fighting Voice of the Mountain
Dessa: There! Looks like a wind elemental. Must be what that weird spirit was talking about. Let's get to work.

During Fractal before defeating Voice of the Mountain
Howling Wind: Turn back!
Dessa: Did you say something?

Upon defeating Voice of the Mountain
Dessa: You're doing great. I–this is strange. Why is it so– Sorry, I just feel a little off all of a sudden.

Upon freeing Sorrow of the Mountain
Dessa: Well done, but we should keep moving. I'm not in the mood to hang around here.

Upon defeating Fury of the Mountain
Dessa: Hm.

Upon wiping
Sorrowful Spellcaster: I warned you. It's pointless!

Fear: You're weak.
Sorrow: Why are you so useless?
Guilt: No one can count on you.
Fear: You're worthless.
Sorrow: She's better off without you.
Guilt: You're out of control.
Fear: You were born flawed.
Doubt: All you do is hurt everyone.
Dessa: We're not just dealing with dark magic. This is something much more sinister. She needs our help.

During Battle, at 66% transition
Doubt: No one understands.
Dessa: But I think I know how it feels. It's... heavy. And it hurts.
Dessa: And even when you're not thinking about it, you still feel this... weight. 'Cause it never really goes away.
Dessa: That feeling will drown you, if you let it. But we won't let it. We won't let you drown.

Upon defeating Ai
Ai, Keeper of the Peak: I've wanted to do this for so long. GET OUT OF HERE! GO! You heard me, OUT!
Dessa: I'm glad we could be here for her. Losing someone's hard enough without blaming yourself.

After giving the letters to Ai

(Spirit of the Mountain and the 3 mini bosses appear)

(Spirit of the Mountain transforms into Lan, a human child ghost)

Fractals of the Mists
Retrieved from "https://wiki.guildwars2.com/index.php?title=Sunqua_Peak_Fractal&oldid=2629001"
Categories: