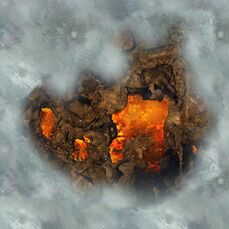 Eliminate a grawl cult that resides inside a volcano.

After the starting cut scene, enemy grawl waves will attack the party. Kill them off until they stop coming.

In order to proceed, the party will have to travel down a corridor. Unfortunately, flaming boulders roll down the same corridor. The boulders instantly kill players they roll over and leave flaming tracks that cause burning. There are several large alcoves to the side where players can rest up safe from the boulders. Speed boosts help catch the areas free of tracks and condition removal will take care of the burning. At the end of the corridor, there is a safe zone that allows your party to prepare for the next section.

When you find the shaman, he will put on a shield. The shield makes the shaman invulnerable, however, it can be taken down by throwing flaming rocks that spawn on the ground at the shaman. Beware since the rocks spawn is preceded by a large AoE damage and knockdown effect. A suggested strategy is to have one person pick up the rocks and fling them at his shield until it drops, and keep the other four on the veterans. You will want to prevent the veterans from reaching the humans by using crowd control. Once his shield is down, the boss is easy to kill. It is advisable that the party kill any remaining veterans since they will start attacking for fairly high damage and may unexpectedly down players. The shaman may reapply his shield, however only one rock is needed to break it this time.

The party will now have to jump down broken railway tracks to reach the lake of lava, fighting off some enemy imps. Since all jumps are made from high to low, this should not pose much of a problem for the party.

The party may observe a skeleton with a hat near a chest about halfway, possibly a reference to Indiana Jones. This means they are on the right track - turn left at the skeleton and continue lower until you arrive on a platform with the boss.

The platform with the Grawl shaman will burn players that are not moving. It is recommended to strafe left and right to both maintain one's basic position as well as counter the nature of projectiles to over shoot to the player's side. There are also "lava pits" on this arena that will unexpectedly fill with lava and damage players inside them. This may happen even when there is no lava due to a visual bug. This platform is quite spacious and can oftentimes allow a player to run away from the boss on the platform, remain burn free, and get out of combat. The boss has six skills:

Upon arrival
Dessa Observation Mode: Okay, reading a number of... Hey, what are they... Those grawl just threw those humans into the volcano! Get them!

Upon defeating the shaman
Dessa Observation Mode: There, that shaman's in the soup now. That should—wait. Reading a new fractal disturbance!