The term endgame refers to the content that keeps players engaged in the game after they reach the maximum level. It focuses on progression and replayability, since no developer or company can deliver content as quickly as good players consume it. While Guild Wars 2's open-world and personal story uses Dynamic level adjustment so that high-level players can still play in those low-level areas, endgame content is catered towards max level players.

Guild Wars 2's endgame content is very varied but can be categorised as follows, further developed below in the body:

One of the singularities of Guild Wars 2 is the lack of "gear treadmill" (where new gear sets are added periodically making previous gears obsolete). Instead of getting better gear, it is the player that is expected to get better at the game.

When looking for an endgame, most of the time the purpose remains to get some sort of progression. Guild Wars 2 allows that progression to be directed towards either a specific character or the whole account.

A character that has reached maximum level is only at the start of their journey.

These are trait lines that open up new worlds of possibility for each profession.

Heart of Thorns and

Path of Fire each introduced an elite specialization to each profession, and

End of Dragons will too. Elementalists can become

weavers to attune to two elements at once, thieves can become

deadeyes to snipe their foes with precision,

revenants can channel Glint as

heralds, and so on.

Each elite specialization requires 250 hero points to fully unlock it, with each hero challenge in expansion maps providing 10 of those points.

One of the first goals of a level 80 character should be to get a full set of gear of the desired attribute combination, together with runes and sigils. Gear of FExotic quality is often easy and inexpensive to obtain through the trading post, and is enough to welcome players into the endgame. As players progress, they will begin their journey towards GAscended gear, the best gear in the game, obtained mainly through crafting. HLegendary gear is as powerful as GAscended but has an added QoL through Legendary Armory as well as having the option to swap upgrades and attributes freely.

Gear attributes, together with traits, weapons, and utility skills, create a build, which determines the effectiveness of a character. New players might want to consult external guides and builds before starting their gearing process and venturing into the endgame.

Furthermore, all professions have several builds with different goals in the endgame. A player might need power based gear for one build, and healing for another, so the gearing process is pivotal to the endgame.

See also: User:Tanetris/So You Want To Gear a Character

Pressing a locked bag slot in inventory opens this prompt.

Beyond that, there are other things that contribute to character progression:

Guild Wars 2 also focuses on account progression, a set of features that, once unlocked, become available to all characters in the account.

Mastery tab in Hero Panel showing an unfinished mastery and some of the unlocked masteries.

The mastery system is the main account-wide progression system, providing all of the characters of the account with benefits such as gliding, mounts, etc. In essence, masteries work like a levelling system, except instead of getting character levels, players earn different passive effects, abilities or are able to access new content.

Shortened as PvE, in this content players fight against NPCs and the environment. PvE is a very wide term that encompasses things like story and world bosses, the endgame focuses on the following:

Starting with Heart of Thorns, map meta events are large scale battles where a large number of players, or even every single player on the map in some cases, works towards a common goal. These events are on a timer, which can be consulted in Event timers, have a low or non-existent entry barrier, and are the first step in the PvE endgame.

Portal in Lion's Arch to access Fractals of the Mists.

Fractals of the Mists have taken over dungeons in instanced 5-players group PvE. Fractals are short, repeatable, rewarding, and have an innate progression system. They feature 4 different levels of difficulty, progressively introducing more mechanics known as instabilities to shake things up. Fractals are the perfect stepping stone for PvE players as they progress through the easy tier 1 fractals into the hardcore tier 4 fractals with challenge motes.

Agony in higher-level fractals. In addition, you are also gated by your Personal Fractal Level which is basically the highest level fractal you can yourself start. This can be surpassed by having someone else open the fractal for you. Fractals of the Mists can be accessed from Lion's Arch near the Fort Marriner Waypoint and Mistlock Sanctuary.

Raids are 10 player squad-based PvE instances focusing on challenging combat and mechanics. Each raid encounter typically utilises multiple phases with several unique mechanics which test your squad's coordination, damage output, and positioning. It is the most challenging PvE content in game in terms of required skill. The main hub for all raids is the Lion's Arch Aerodrome.

While infamous for lacking an innate progression system and sometimes having a high barrier entry in the LFG tool, the reality is that there are several communities focused on training and welcoming players to this game mode. It is highly recommended to start raiding within a guild or a training community for this reason and not in the LFG. Note that some encounters require certain masteries (at least from a few people in the squad). More information on these masteries in the encounter wiki pages.

Prompt to join a Strike Mission in Eye of the North.

Strike Missions are 10 player squad-based PvE instances, featuring a public and a private mode. Being relatively simple, they serve as an introduction to 10-player based combat, and somewhat scale in difficulty. More challenging strike missions have been announced for

End of Dragons. You can join Strike Missions in the Eye of the North.

Dragon Response Missions are instanced PvE content that focuses on story, featuring a public and a private mode. They are connected with the Champions episode of the Icebrood Saga. Like Personal Story instances, Dragon Response Missions can be completed by a party of 1 to 5 and their difficulty scales to accommodate the number of player. They start with a pre-event that provides massive increases to player stats, and the group is joined by some npcs that provide additional bonuses. Albeit very easy, they feature challenge motes to slightly increase the difficulty.

sPvP, shortened as PvP, in this game mode players fight each other. Teams of 5 players must cooperate to overcome their enemies and reach 500 points faster than them. Here, players have to balance offense and defense, as killing an enemy will not do much good if the team loses too many objective points in the process. After a match players will be awarded Reward Track points to obtain various rewards such as crafting materials, minis and loot boxes containing weapons and armor. PvP can be played starting at level 2 because all players are scaled to level 80 and their gear is just as strong. PvP uses different gear that is provided for free by the game through the hero panel. There are two game modes. Conquest: where players capture and defend nodes; and stronghold, where players assault the enemy's base while defending theirs. Conquest is considerably more popular.

Matches are fast-paced and games can be won or lost in mere seconds. 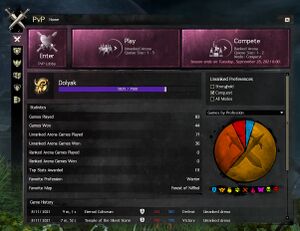 World versus World versus World, shortened as WvW, is a large scale player versus player game mode focusing on castle siege. Players are grouped together according to the world that they belong to and have to face against two other worlds on the same battlefield. A world has to procure nodes to strengthen their main castle. WvW is much slower than PvP, but features large scale fights and integrates some PvE elements while focusing on PvP. The alliance system currently in development will considerably change how players are grouped together in this game mode.

Guild Wars 2 is a story rich game with large maps encouraging exploration. On top of its two expansions,

Heart of Thorns and

Path of Fire (and the upcoming

The game has come a long way since its Personal Story back in 2012. It was followed by the first season of Living World, which is not replayable as it happened live and added 1 new map. This was followed by the second season of Living World, which was redesign to be able to be replayed by future players, and added 2 new maps. Then came Heart of Thorns, the first expansion, which focuses on open-world exploration and challenges through its 4 maps such as its map-wide meta events, and added gliding and elite specializations. Season 3 expanded Living World, with each release adding a new map, 6 total, and masteries. Path of Fire, the second expansion, added 5 new maps, mounts, and elite specializations. Season 4 followed the design of Season 3 adding 6 new maps and mount masteries. The Icebrood Saga attempted to redesign Living World but wasn't ultimately successful throughout its 3 maps and 5 episodes and a change in direction pulled resources into the development of End of Dragons, the third expansion.

Sometimes nicknamed Fashion Wars, Guild Wars 2 provides its players with hundreds of cosmetic armor and weapon skins to customise their characters. Players can collect dozens of dyes to change the color of their armor, and use transmutation charges through the wardrobe to change the appearance of their armor and weapons. There's something for everyone. Simple skins looted from enemies while levelling, cultural armor and cultural weapons purchased in cities with gold, dungeon armor and weapons to show off players dungeoneering skills, npc armor like the Orders of Tyria skins, or even sets modelled after pirates or the Lionguard; they are all achievable in-game. Heritage armor even rewards players of the original Guild Wars.

The gemstore also contributes to the cosmetic-based endgame (while helping fund the game), providing mount and glider skins to change the appearance of a player's transportation. There are also outfits to change a character's appearance without changing their armor, and chairs to sit with style in the open world. Furthermore, the Black Lion Trading Company periodically creates new sets of weapons that players can trade with each other.

HLegendary gear, which is just as strong as GAscended gear, lets players show off their hard-earned flashy gear, while the Legendary Armory ensures every character in the account can use that gear that can change attributes at any time, combining looks, swaggering, and convenience.

Achievements reward achievement points, which are visible to other players. Several skins can also be acquired through achievements or by reaching points thresholds. Some achievements are collections that provide considerable rewards when completed.

Guild Wars 2 is a Massively Multiplayer game, and there are plenty of opportunities to meet new people and strengthen the feel of belonging to the community, such as chatting with other players, roleplaying, mentoring, helping others for example with a hard hero challenge, or joining a guild. Guilds are the perfect way to find new friends to play with, they encourage socialization, and even have guild missions so that all members can help grow the build, and guild halls to decorate and hold meetings.