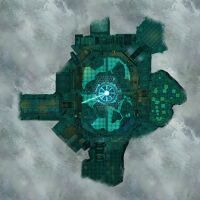 Investigate the destruction of the Thaumanova Reactor.

The Thaumanova Reactor Fractal is a Fractal of the Mists which occurs at levels 15, 34, 43, 55, 64 and 82. During the 1326 AE Captain's Council election, Ellen Kiel made a promise to support research into this fractal, which depicts the Thaumanova Reactor disaster, if elected. Since Captain Kiel was victorious, she worked to make this fractal available as seen here.

Activate the detonator to blow a hole in the wall, then take a right and run up the stairs to reach the platform in the middle of the room on the upper level. Defeat the elite Flame Legion Fire Shaman. Once he's dead, you'll be asked to disable the four colliders around the reactor.

There are a total of 4 rooms containing colliders around the reactor. Activating consoles in the rooms will disable the colliders. All 4 colliders will need to be disabled.

Champion Subject 6 uses poison and blocking moves. Repairing oozes move toward Subject 6 and heal it for 6% if they reach it. At tiers 3 and 4, a golden Veteran Ooze will spawn at 75%, 50% and 25% health thresholds and move towards Subject 6 to heal it for 25%. The golden oozes have defiance bars, rendering them immune to chill, cripples, and immobilizes, unlike the blue oozes. Successfuly breaking the bar will stun the ooze for a short time, making it easier to kill. If any of the oozes reach Subject 6 and bring it above one of the three thresholds, a golden ooze will spawn.

When Subject 6 takes on a shield-like form and blocks all attacks, stop attacking immediately. Each blocked attack adds a stack to Overload, which can wipe the party if allowed to reach 20 stacks. Disabling auto-cast or turning your back to the boss can help. When the golden oozes spawn, all attention should be focused on them. The blue oozes are less urgent but should not be completely ignored.

Destabilized to the Thaumanova Anomaly. 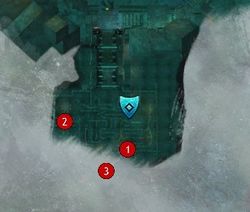 Players must navigate through a maze to disable the shielded collidors. To bring down the shields, party members need to interact with consoles. There are four consoles in the room: one console at locations 1 and 2, and two consoles at location 3. Players will need to activate console 1 to gain access to console 2 which grants access to the consoles at 3. The minimap shows the locations of the consoles in the maze.

The maze is guarded by golems and repulsor turrets. Golems will only aggro if the player steps within the orange circle at their feet; if they do, the golem will become fixated on the player and attack them until the effect wears off or the player moves out of range. They may also deaggro when hit with the Shield's Repulsor Bolt skill. Players may pick up safety shields at the entrance to the maze to absorb the repulsor turrets' attacks:

1 and 2 only need one player each, while 3 is designed for two players. However, one person can handle Console 3 by standing between the two consoles, and interacting with each one manually. Alternatively, they may use skills and traits that remove conditions, or use a teleport to move between each console. It is possible to dodge through the laser bolts, and there are small areas where the bolts will not hit, allowing more experienced players to navigate the maze without a shield. Stability will stop you from being knocked down if you are hit, but will not block the laser's damage. If you die, the shield will be left at the location you died and will not reset at the entrance; however, there are plenty of extra shields at the entrance.

After the consoles are disabled, the lasers and golems will deactivate, and a cooling rod will appear in front of the 3rd console. Teleport buttons will become available near the 2nd and 3rd consoles to allow players to quickly exit the maze.

The cooling chamber requires players to reach the opposite end of the room. While in the room, players will be constantly damaged by the heat and slowed. Their skill bar will change to the below skills. The Heat Shield is obtained by holding a Cooling Rod. Cooling Rods can be obtained by clearing the other rooms.

Cooling Rods can be placed in the Cooling Rod Receptacles near the sides of the chamber to reduce the damage received, and provide a safe zone where players do not take damage. While the player's skill bar will change, their utility slot skills will not, allowing players to use teleport skills and skills that can mitigate damage. It is possible to dodge through the flame wall that slowly advances towards the entrance. Teleport, shadowstep, and other movement skills can help players cross the chamber quickly:

Once all four colliders are disabled, return to the central platform. Each party member must activate the console on the west side of the reactor (by Scarlet) to be teleported up to the final boss platform. Once players reach the boss platform, they will gain the Special action skill

Hex Shield (Default key: -), which prevents a platform from disappearing.

Throughout the fight, the Anomaly will occasionally make platforms disappear with its attacks. Platforms marked for disappearing will fade in and out for a few seconds and reappear after a short while. At 75%, 50%, and 25%, the outer platforms will disappear permanently, reducing the area players can move around.

The best way to avoid falling is to spread out and be aware of where your teammates are at all times. Avoid running into each other, otherwise you may cause them to fall off, and if you do happen to come in contact with someone, run along with them to reduce the number of platforms that disappear. Smart use of Hex Shield will prevent the platform you are currently standing on from disappearing, and it can be used on the same platform multiple times in a row by different players. Players who have fallen off the area will reappear in the center where the boss is. Even though it is surrounded by a barrier that repels players, it is possible to revive them by standing close enough. Teleport skills will allow you to move to a safe platform in dire straits, and it is possible to jump a one hex gap. When your hex starts to fade, immediately move and/or dodge to a safe hex. But, remember that the attack may follow you, so you may need to keep moving.

For dialogue during the Fractured! release, see: Thaumanova Reactor Fractal/Fractured

Section-stub. This key section of the article is incomplete. You can help the Guild Wars 2 Wiki by expanding it.
Reason: Page had story mode from Fractured! dialogue up, needs verifying what's different

Near cooling chamber, context unclear[verification requested]
Dessa Observation Mode: Hmmm. Without additional cooling rods, the only thing that room's good for is suicide.

When approaching the dormitories

Section-stub. This key section of the article is incomplete. You can help the Guild Wars 2 Wiki by expanding it.
Reason: Each of the four NPCs have 1 line when approached, 2-3 lines if you take too long, and 1 line when saved; Dessa has at least one line when they all die, might be more lines if only some die

One of the following lines (probably depending when you get here)

Dessa Observation Mode: You're going to need the access code for that security door. One of the surviving technicians should have it.

If failed to save the technicians
Dessa Observation Mode: Never mind that collider. It's too late. All the technicians who had the access code are already dead.

Disabling the first collider
Dessa Observation Mode: You have to shut down more colliders before you can extract a core sample.

Disabling the final collider
Dessa Observation Mode: I think you're ready for the extraction. Head to the control panel and give it a try.

Finding Scarlet Briar taking sample
Scarlet Briar: Reactor approaching critical, panicked evacuation, general mayhem and hysteria... Yep, I'd say my work here is done.
Scarlet Briar: Sorry about all the death, and for the portal pandemonium.
Scarlet Briar: I told the Inquest chaos energy was a misnomer. Mind you, dragon energy is tricky, so I can see how they flubbed it.
Scarlet Briar: At least they helped identify the network of magical channels that crisscross the globe. That was a breakthrough.
Scarlet Briar: Now we know how NOT to do this kind of research right on an intersection of those channels. Live and learn, right?
Scarlet Briar: That's progress. Hooray for progress! Ooh, but it's getting a bit too deadly in here for me. 'Bye now! (Disappears afterwards)

Dessa Observation Mode: I don't know how to say this, but the energies in that facility are...becoming something. It's an anomaly I can't explain.

Approaching Thaumanova Anomaly
Dessa Observation Mode: I don't know if that anomaly is intelligent, but it's definitely hostile. And the only way out is past it.
Dessa Observation Mode: Full meltdown is moments away. You have to get by that thing, and fast. If it doesn't kill you, the radiation will.
(when saved Greeza and Chibbs previously)

Inquest Technican Greeza: Now I return the favor you did me. I'm going to overcharge the reactor and destabilize that monster.
Inquest Technican Chibb: Helping is noble, but I also want to live. Oh well. We're probably all doomed anyway, so I might as well pitch in.
Dessa Observation Mode: Everybody you saved is pitching in to help disperse the anomaly. See? Virtue is its own reward.

Bug:
The lines "Everybody you saved..." and "This is it!..." are played twice at the same time, with the first simply being just "Dessa".

Fractals of the Mists
Retrieved from "https://wiki.guildwars2.com/index.php?title=Thaumanova_Reactor_Fractal&oldid=2537729"
Categories: