The interior of the Consortium Gift Shop. 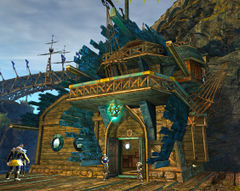 The Consortium Gift Shop was the Consortium's primary structure in Lion's Arch during 1326 AE. It was originally planned to be the entryway for the Consortium's resort on Southsun Cove,[1] however, when the asura gate leading to Pearl Islet was activated, due to the receiving gate not existing, an error occurred and the gate connected to the Fractals of the Mists instead. The Consortium decided to utilize the mishap for a different enterprise immediately.[2]

After the Molten Alliance assaulted the areas around Cragstead and North Nolan Hatchery, the Consortium built a new asura gate, properly linking it to Pearl Islet and their Consortium resorts, and used contracts to put refugees to work on Southsun Cove as settlers to inhabit the area and make it seem friendlier for their profit margins.