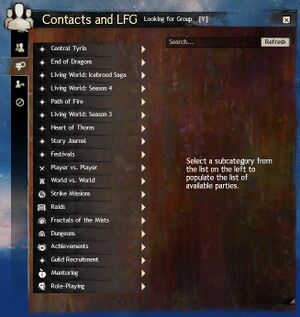 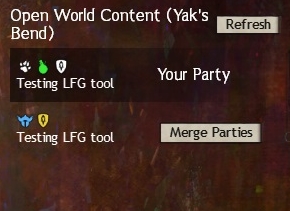 If a squad's map instance is full, this will be marked with the

icon. Despite the map being full and inaccessible by players not already in the map instance, the squad can still be joined.

Other common uses for this panel are to taxi players into large group content such as world bosses, or selling access to—or completion of—game content. Using the LFG tool to sell spots on a party is allowed[1] if no otherwise reportable offense is committed by doing so. The buyer carries the full risk and will not be reimbursed by ArenaNet in the case of nonfulfillment.

On March 6th 2018 extended filter options where added to the tool.[1]

Assemble your party or squad and explore the main continent of Tyria.
(This includes all locations accessible in the Play for Free version of Guild Wars 2.)

Venture to a long-shuttered corner of the world and untangle the mysteries of Cantha, a metropolitan nation of innovation fueled by powerful jade technologies.
(Requires the End of Dragons expansion.)

Explore Tyria's frozen north and immerse yourself in charr and norn culture as the Elder Dragon threat intensifies.
(Requires the Path of Fire expansion and the purchase or unlock of Living World: Icebrood Saga episodes, or grouping with someone who already owns them.)

Return to the plains of Elona and beyond to confront the Crystal Elder Dragon, Kralkatorrik.
(Requires the Path of Fire expansion and the purchase or unlock of Living World Season 4 episodes, or grouping with someone who already owns them.)

Blaze your way through Elona on the back of your trusty mount, and fend off the forces of Balthazar, God of War and Fire.
(Requires the Path of Fire expansion.)

Infiltrate a shadowy enemy organization across a variety of locations spanning Central Tyria and Maguuma.
(Requires the Heart of Thorns expansion and the purchase or unlock of Living World Season 3 episodes, or grouping with someone who already owns them.)

Navigate the twisted jungles of Maguuma and fight against the minions of the Elder Dragon Mordremoth.
(Requires the Heart of Thorns expansion.)

This is a collection of the stories that shape Tyria.

Structured Player vs. Player, where everyone fights on an equal level. The core set of skills and traits are unlocked for players to customize and create their own specific role.

Large-scale conflicts in which three worlds face off against each other in a three-way fight for domination. All players are scaled up to level 80.

A scaling five-man dungeon displaced by time and space that grants players greater rewards as they delve deeper into the Mists. Players must be level 80 to enter.

Group content designed for parties of 5 players. Dungeons are broken into easier story mode experiences that let you fight alongside Destiny's Edge, learning more about their story, and the more challenging explorable mode, which requires more coordination and skill.

Achievement points can earn you cool rewards for your characters and your account!

Adventurers new to Tyria can benefit from a kind and educated mentor.

Centralized location to find other players who want to explore the world of Tyria. 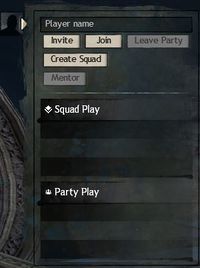 Bug:
Some LFG categories incorrectly state that to play Living World Season (3-5) maps, you can group with someone who already owns them without you actually owning them. However, this is incorrect, as you cannot enter a map without owning its episode, and other means to enter the map, such as using Teleport to Friends, give error in these cases.