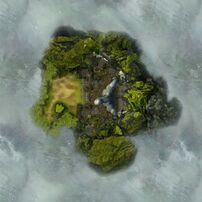 Investigate a strange cult in an unknown location.

The Cliffside Fractal is one of the Fractals of the Mists occurring at levels 6, 21, 47, 69 and 94. It represents the early history of Tyria, near the beginning of history.[1]

Marker with 1-19 stacks of corruption.

Marker with 20-29 stacks of corruption.

Marker with 30-40 stacks of corruption.

This hammer is acquired very early. Its fourth skill,

Seal Breaker is required for the fractal's puzzles. If the hammer wielder is downed from a fall, the hammer will spawn near them. If it cannot be found or is left behind, talk to a Displaced Researcher or Displaced Agent to retrieve it.

The cultist hammer applies a condition called Hammer Corruption. Corruption stacks in duration and can only be removed by dropping the hammer. (One stack is applied and removed every one second.)

Defeat the Fanatic, Veteran Fanatic and the 2 Veteran Chanters, and grab the Cultist Hammer at the altar, near the Colossus feet. Climb the scaffolding to reach the knee seals.

There are 4 enemies here. Extra enemies spawn after the original four are defeated.

After the seals are broken, your party can leave the hammer on the ground. There will be a Displaced Researcher available to replace the hammer after the next section.

To progress, the party will pass some spike traps on the ground. Look at the ground for trap indentations. Some traps are decoys and do not trigger.

At the end of the tunnel, there is more scaffolding. This scaffolding has gargoyles that push air out of their mouths. Use timing to run past the traps. In addition, the wind can be dodged, blocked with

Aegis, or a player can use

Stability to run through them. If you fall off, you will be downed between the wooden bridge and the tunnel prior to this scaffolding. At the end of the scaffolding, there will be 1-4 switches to deactivate the gargoyles. Interacting with a switch will

Immobilize you. At higher tiers, it's suggested you bring condition clearing skills to be able to hit multiple switches.

If your party has dropped the hammer, talking to the Displaced Researcher ahead can provide another.

Climb the last scaffolding to reach the chest seal.

There are AoE fires burning on the floor. The fires are both preceded and followed by a small fire (the size of the red circle will not change). The colossus will blow out one of the flames at a time. There will always be one safe spot and two burning ones. Keep moving onto the safe parts, charge the hammer, and destroy the seal. The initial mob spawns here include a decent amount of veterans. It's recommended that you clear these out before beginning to move with the fires. Later spawns include fewer veterans, in more manageable numbers.

Afterward, continue following the path upwards to the arm seals. There are no enemies or traps for the scaffolding to the next level.

On this level, there are two seals separated by a hallway. The hammer needs to alternate between hitting each arm seal, as when one seal is hit it becomes protected by a purple bubble. Accordingly, the other seal loses its purple bubble and can be hit with the charged hammer.

After the initial veteran is killed, foes respawn indefinitely until the seals are destroyed and apply heavy stacks of vulnerability.

Chanters on each side will regenerate that seal's health. The seals' repair rate is the same at all difficulty levels. Keeping the foes aggro'ed on one side will minimize the healing done to that seal, but the healing can also be ignored if your party moves quickly between the two seals.

Swiftness, blinks, and portals can help reduce the travel time between arm seals.

After both arm seals are broken, a gate to the right of the first seal will open. The scaffolding to the final seal is trapped with timed explosives that will knock you off. Wait for them to clear at each landing or follow behind the explosions as they go up the ramps. The shorter ramps with explosives can be dodged. Speed boosts or a well-timed

Stability can be helpful. At the end of the scaffolding, there are 1-4 switches to deactivate the bombs. Again, these may be cleared by one person as long as they have condition clearing skills.

The Legendary Archdiviner is the main boss of this fractal. He uses the Cultist Hammer. Prior to entering the final chamber, there are chains on the wall. If you are locked out of the room, these chains can be activated to allow you inside.

In between each phase, there is a transition phase. They occur at 75%/50%/25%/0% health. He will become invulnerable to damage and will drop the hammer. The purple protection on the seal in the center of the room will be removed and four Chanters will spawn on the circle around the seal, giving you an opportunity to charge the hammer by killing one of them. At fractal levels below 10, the mobs will despawn after you hit the seal, but will not in later levels. They apply conditions quickly, so it is advisable to clear them out first before using the charged hammer on the seal. After the seal has been hit by the hammer, the Legendary Archdiviner will stun the party for 1 second and take his hammer back.

He starts with four cultists around him. In this phase, he only uses a hard-hitting melee attack and channels his AOE circles from the first fight that apply conditions after a couple of seconds.

At 50% health, he gains a permanent

In addition, he will start locking people in cages. Prisoners can break out destroying the cage door. While inside the cages, players receive stacks of torment.

He also spawns two ranged devourers periodically. He will continue spawning two minions throughout the fight, so if they are not killed consistently, it is possible for many minions to be active at the same time.

At 25% heath, he gains a permanent

Swiftness effect. Same as Phase 3, except he will stop channeling wells and gains the ability to send ranged projectiles at several party members simultaneously.

At scales 71-100, he will also transform into a demon avatar (alternate form of the Revenant's Embrace the Darkness (Legendary Demon Stance)), increasing the speed and damage of his attacks.

Instead of simply stunning the group at the end of this transition, he will remain invulnerable. The hammer must be charged and the seal needs to be hit for the last time.

Upon arrival
Dessa Observation Mode: Are you seeing this? Something that gargantuan must be chained there for a reason. I don't know about this.

While breaking the seals
Dessa Observation Mode: If those zealots are trying to kill you, perhaps this behemoth can't be all bad. Quick, locate a method to liberate him.

Upon reaching the arm seal
Dessa Observation Mode: Keep going. I'm theorizing there's a master control at the top. That should free this captured colossus.

After breaking the final seal
Dessa Observation Mode: Fascinating. I wonder where he came from—and where he's going. So much data to analyze. As for you, tell me when you are ready to exit.

Fractals of the Mists
Retrieved from "https://wiki.guildwars2.com/index.php?title=Cliffside_Fractal&oldid=2579002"
Categories: