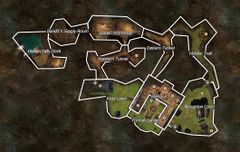 If you're raring for a fight, take your friends to Caudecus's Manor in the Shire of Beetletun. Check your mail for the dungeon's location.

Caudecus's Manor (abbreviated CM) is the home of Minister Caudecus within the Shire of Beetletun, who is hosting a party celebrating the continuing peace treaty between humans and charr, with Queen Jennah in attendance. Yet things are not what they seem, and all this frivolity may be hiding much darker secrets below...

Completing this dungeon or its reward track awardsTales of Dungeon Delving which can be used to purchase the dungeon's armor and weapons from any Dungeon Merchant. A full set costs 1380 dungeon currency in total. 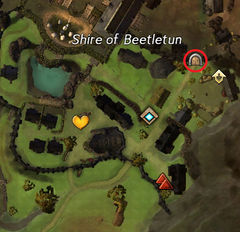 Location of the Caudecus's Manor entrance.