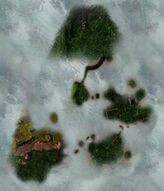 Explore the solid ocean, and slay the beast within.

Traverse across floating jade platform fragments until you reach the stage with the Jade Maw. You can either fight the Irukandji as they are encountered during the path, or skip the monsters, and run all the way to the Jade Maw as slaying all the monsters before the Jade Maw is not required to complete the fractal. Be careful in jumping however as falling off the edge will transport you to the platform you were at prior to your fall -- Team members will not be able to revive you if they have continued ahead of you. Upon reaching the Jade Maw's platform, you will go through three phases to defeat the Jade Maw.

The platform will have 2 Jade Tentacles and multiple Irukandji. Killing the tentacles causes the Jade Maw to begin using his laser beam and causes more Tentacles to spawn. Tentacles do not move from their spawn locations. He will also begin summoning Veteran Jade Colossi. Killing them fills the bar in the top right. When the bar is filled, he no longer spawns Colossi and resummons all of his tentacles. He will continue to attack and summon tentacles for the duration of the fight.

Throughout the fight you will need to use Reflecting Crystals to damage the Jade Maw and to avoid being downed. Because of the Jade Maw's Dense Scales, it is invulnerable to normal damage. The only way to damage it is to throw a charged Reflecting Crystal at it for 5% of its health, or to kill its summoned tentacles for roughly 3% of its health. To charge the Crystals, players must absorb the Maw's laser attack while holding a crystal. A player will know if they are targeted by this ability by the

large red skull above their head. Crystals can absorb an endless amount of beams, though this doesn't increase the damage done. Being hit by a beam without a Reflecting Crystal will deal lethal damage. Invulnerability/resurrect or alternate health pool effects such as Necromancer's

Rigorous Certainty will be depleted by the beam, but will leave the player alive.

Bug:
It has been noted that sometimes you cannot hear and/or see the boss's laser attack; It can be safely timed based on the skull's disappearance.

These creatures will be present throughout the fight and respawn periodically. When their health reaches 0, they will become invulnerable and will continue their last attack. (If they were performing a sweeping knockdown on death, this attack will finish.) Tentacles may be stunned or dazed to halt attacks.

Note: The damage caused by a reflecting crystal or killing a tentacle cannot trigger more than once at the same time, so performing any of these actions at the same time will waste the potential damage. It is therefore better to quickly kill the tentacles one by one, and pausing whenever the Jade Maw attacks with its beam attack to let the reflected crystal do its damage.

Upon arriving at the Jade Maw's platform, you will be hit with one agony check. There will be two Veteran Jade Maw Tentacles and several Irukandji. Under level 60, you only need to focus on the Maw Tentacles, as after the phase objective is complete, any remaining Irukandji will despawn. On level 60 or above, they do not despawn, so killing them is recommended. After the second tentacle is killed, the party may find a safe spot at the corner of the arena where members first entered if they wish.

During this phase is where you will start to need to collect the Reflecting Crystals and avoid the Jade Maw's death ray. Tentacles spawn and respawn around the arena. There is at least one safe spot from the tentacles: the corner where you first entered by jumping. Note this "safe" spot is safe only from tentacles, not from the Jade Maw's attacks.

After clearing out all the Jade Colossi, the Maw Tentacles and the Maw will remain, so continue to kill the tentacles and use the Crystals to deplete the Jade Maw's health. When the Maw nears death, it will target all players with the skull and do a final laser attack that hits all players. To prevent dying, simply pick up a crystal and hold it, letting the animation play out. At least one person needs to avoid instant death by grabbing a crystal. If all players die the entire fight is reset.

Upon arrival
Dessa: How bizarre. The readings state that this was water once. But good news, this fractal appears fairly stable. You should be out in no time.

Upon getting near Jade Maw
Dessa: I retract my statement. Unstable event! Right in front of you!

Upon defeating Jade Maw
Dessa: The fractal's stable, thank the Alchemy. Now, hurry up and exit before something else appears.

Fractals of the Mists
Retrieved from "https://wiki.guildwars2.com/index.php?title=Solid_Ocean_Fractal&oldid=2339607"
Categories:
Hidden category: