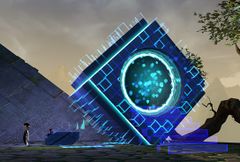 Lord Vanquish has kidnapped the Princess! You must save her!

Super Adventure Box, or SAB, is a special activity originally introduced during the eponymous release as part of April Fools' Day 2013. Originally accessed by talking to Moto in Creator's Commons, it is a "game within a game" with an 8-bit platformer theme, sharing some elements with jumping puzzles, and uses the same enter mechanism as dungeons and thus can be completed alone or with a group of up to five players. The activity is character-based: any items and upgrades obtained on one character do not carry over to other characters. While inside, players are able to earn Bauble Bubbles that can be exchanged with Moto for various items.

All players start off on equal ground: Players will be under a hidden transform effect, effectively making all skills inaccessible except for the ones given inside the box. Current equipment and traits will have no effect on the character. The player cannot change, equip, or remove equipment while in the box. All effects on the character will be removed upon entering the box, including those from boosts. The only elements that persist outside the box are items obtained in the box, such as baubles.

The Hub contains portal houses to four worlds and a gate back to Rata Sum. Players can start a world by entering a door and then selecting a difficulty level and zone. Players can only visit zones they have already completed. This acts as a level select mechanic for the platformer.

Super Adventure Box is divided in four worlds, each in turn divided in a total of three zones plus a bonus zone. Each zone is unlocked after completing the previous one, and all of them can be accessed and played individually without needing to complete the entire world in a go. The first and second zones have a Cage as the final boss, while the third zones have a unique and harder boss. The bonus zone requires completion of the third zone to be accessed each time.

Worlds three and four are not currently available, but might be available in the future.[1]

The yellow bar represents the character's endurance, or ability to dodge in order to evade attacks in the SAB (Super Adventure Box) similarly to the rest of the game. Any enemy attack can be evaded if timed correctly, excluding traps like the flytraps (note, however, that ending the dodge roll inside an enemy causes damage and knockback)[verification requested].

The number of hearts displayed represents the player's health bar. All players start off with three hearts. Normal hits received use up one heart, while weaker hits (from poisonous water, for example) can use up half a heart. The number of hearts, the player's total health, can be increased by gaining Heart Vessels. A Heart Vessel is obtained by defeating the final boss of each world in any mode. Players can only obtain one Heart Vessel per world. If a player loses all their hearts, they lose a life and are moved back to the last known checkpoint with maximum hearts. Players can restore lost hearts by eating food which can drop from enemies or from breaking items in shops. Players can also heal themselves as usual, by using skill #6, which requires recharging by purchasing Health Refills from shopkeepers. The Health Potion healing skill can hold up to 9 charges. It is currently not possible to heal other players.

There is no falling damage, no matter how far down the player falls or jumps, provided they land on a solid surface. Falling into an abyss, however, sends the player back to the last known checkpoint with one heart less.

Players who die without any lives get sent to the Game Over room.

Players start off with two lives at the beginning of each zone, and more lives can be purchased from certain shopkeepers in each zone. When a player loses all their lives, they are moved to the Game Over room, surrounded by ticking bombs, rising lava, and spiked walls. However, Moto will be there to offer assistance, allowing players to either use a Continue Coin or purchase one for 50 Baubles, which will give them 5 lives (99 lives with an Infinite Continue Coin) and move them back to the last activated checkpoint. If the player has no continue coins and not enough baubles to buy one, or declines to buy one, they will be returned to the Hub and all progress on the zone they were on will be reset if they were either in Tribulation Mode or not in a party. Continue Coins are also available from Moto outside of the Super Adventure Box in Creator's Commons, at a cost of ten Baubles for one coin.

Baubles are used as currency, allowing various skills and items to be purchased from the shopkeepers in the various levels of the SAB, as well as from Moto. Initially, players can carry only 250 baubles, but this limit can be increased to 500 with the purchase of a Bauble Purse and further to 750 with a Bauble Tote Bag. Once the limit is reached, or before that, one can exit the SAB and convert their baubles to Bauble Bubbles from Moto at the rate of 250 baubles for 1 bubble. The number shown is that of the baubles that are in the player character's inventory, excluding any which may be in their vault or on other characters.

The colors used by the baubles which can be picked up in the SAB are aligned with the rarity paradigm used for equipment, with different colored baubles granting a different number of blue baubles (the base currency):

The baubles dropped by monsters will disappear if not picked up within a short time (around 10 sec).

Most upgrades and their corresponding skills, if any, are purchased from shopkeepers across each zone, or obtained as rewards. Skills and other purchased enhancements are character-bound (will only be available to that character which bought the skill). Being swallowed by certain enemies removes all skills except for a special skill which should be used to regain freedom.

Power-ups can be found inside of barrels in Super Adventure Box and grant the player specific buffs for a short time:

Along with Baubles, various skins have a chance to be earned in game from Glorious Chests, as well as items to create certain skins outside of the Super Adventure Box. There are currently five skin sets, each containing all 16 non-aquatic weapons and a backpack, and each set shares the same models and animations, but is colored in a different hue, their color following the Bauble value color scale.[3] Skins acquired as random drops from Glorious Chests can be traded, while skins from all other sources are account bound. Additionally, players can obtain Fancy Furniture Coins from hidden shops which can be used to create various guild decorations.

Glorious Chests are awarded for completing a zone in Normal Mode and Tribulation Mode. Each chest can only be acquired once a day per account for the zone and mode, making a total of 12 of these chests; one per zone in Normal Mode and one per zone in Tribulation Mode. The exception to this is the two bonus zones Cart and Robbers. They reward a single Bauble Bubble instead of a Glorious Chest of which can only be acquired once per day per account, regardless of difficulty. Each Glorious Chest contains:

There is a small chance for it to contain the following:

Each completion of a zone will reward a Bonus Reward Chest that is awarded at the end of the timer for transition:

Additionally, upon completing the different zones in Tribulation mode, players will receive a trophy specific to that world and zone which can be used to craft various skins:

The game pays tribute to the 8-bit genre especially to the Mario and Zelda series of games: