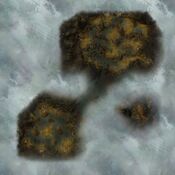 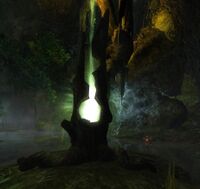 Get all three wisps back to their clefts within the allotted time. Wisps are indicated by pick-up icons on the mini-map. Picking up the first wisp will start a timer. Send at least 1 party member to each wisp. Ensure each party member is ready before grabbing any wisps.

The time limit to return the wisps at the beginning of the fractal becomes lower the higher the Fractal scale is:

After the three wisps are brought back successfully, a passage will open. Proceed into the passage toward the boss. 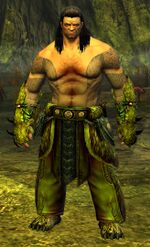 Partway through the passageway to Bloomhunger the party will be ambushed by Mossman. The way forward is closed and Mossman must be defeated before proceeding to Bloomhunger.

Mossman summons wolves and attacks in melee range. He does high damage with his regular attacks, but is relatively easy to kite. Occasionally, he will disappear in stealth, and reappear with a charged attack (which looks like the Warrior's Dual Strike skill) that will likely down his target if it connects. It has substantial range, so be prepared to evade when he reappears. It is possible to keep track of him on the mini-map, which makes it easier to predict and dodge his attack. Some of his attacks (like throwing his axe) can be reflected. Once his health is lowered, he will transform into one of the Norn's racial elite forms (eg. Snow Leopard, Wolf, Raven). He will gain leap skills and a massive damage spike.

In general, applying heavy crowd control effects on Mossman to break his Defiance bar and stun him as often as possible is the most effective strategy. Bring AoE skills and weapons that cleave multiple targets to clear out the wolves.

Once defeated, the passageway will open allowing the party to proceed forward and investigate the clearing.

The Bloomhunger fight increases in difficulty with the fractal level. Upon entering the clearing, the party will see four Wisp Clefts in a circle, and a single Wisp near the entrance to the clearing. To begin the fight, pick up the Wisp and deposit it in one of the clefts. Once the Wisp is deposited, Bloomhunger will appear in the middle and the fight will commence. 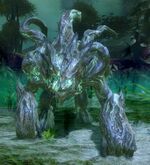 Once the fight begins, a green circle will appear around the wisp cleft the Wisp was deposited in. The green circle will eventually shrink, before disappearing, forcing the party to the next Wisp Cleft in a clockwise rotation. These green circles make Bloomhunger and the spirits it spawns vulnerable to damage. It also gives players standing in them the

He will almost always begin his Pound attack after his Leap attack, giving your party a moment to break his Defiance bar. On higher levels, Bloomhunger will summon Oakhearts to his aid between phases. Oakhearts are slow enemies with large amounts of health and are capable of stunning and knocking down players. They have slow attacks and a lot of health, so it's prudent to decide before-hand on whether your party will kill them individually, or if your party will cleave them with Bloomhunger. Breaking their Defiance bar allows you to deal a decent amount of extra damage to them. Killing them during Onslaught Phases is ideal if the group has decided to kill them, as dealing with the Oakhearts and Bloomhunger at the same time can be tricky.

At 75% and 50%, Bloomhunger will become invulnerable and move to the center of the arena for the Onslaught Phase. During this phase, spirit animals will spawn in the arena and attack the players, the spirit animals are invulnerable until they enter the green ring surrounding the Wisp Clefts. The party must survive the onslaught until they kill enough monsters and Bloomhunger returns to the fight. Bloomhunger will continuously pulse his Poison Rain attack. It is vital for players to bring AoE skills and cleaving weapons to handle the amount of Spirits that will spawn at higher levels. Blinds are also helpful.

After each Onslaught Phase, Poison Blooms will spawn around the arena; the poison put out by these blooms poisons players and applies protection to other enemies. Assigning someone to kill them ahead of the party's movement can greatly reduce the additional pressure.

At 25%, Bloomhunger will return to the center as with the Onslaught phase, but this time he will begin building a charge. Four wisps will appear in each corner of the arena (NW, NE, SW, SE) indicated by pickup icons. The Wisp Clefts will become receptacles for the wisps. Players must return the Wisps to the Clefts before Bloomhunger becomes fully charged, or he will unleash a blast that will severely damage all players (killing them entirely on higher levels). It is best for teams to organize who will take which wisp before the fight starts to avoid confusion at this phase. This can be done easily by placing a personal waypoint on the mini map. (Alt+Left Click)

Once the Wisp Phase is complete, a large green circle will spawn in the center of the room, and Bloomhunger will become vulnerable once again. He will start out stunned, but his defiance bar will recharge quickly. Spirit animals will spawn and attack the players. 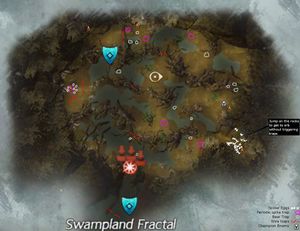 A map of the trap locations that must be avoided to earn the achievement.

Zooming the camera in, all traps can be identified visually:

Upon arrival
Dessa Observation Mode: Ugh, a swamp. I knew I should've sprayed you all with mosquito repellent before you left. All those biting things just waiting to...oh, uh, never mind.

Upon defeating the final boss
Dessa Observation Mode: There, fractal's stable. That was...creepy. Swamps. Ugh, so many squirming, hungry, crawling... Let me know when you want to move on.

Specifically from The Mossman

Fractals of the Mists
Retrieved from "https://wiki.guildwars2.com/index.php?title=Swampland_Fractal&oldid=2339609"
Categories:
Hidden category: