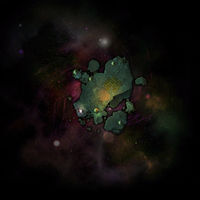 Map of Ascent to Madness

Oh my! The Mad King is attempting to escape from his Mad Realm! If he isn't stopped, he could force his way into Tyria forever!

Ascent to Madness is a dungeon only available during Halloween. Players must travel into the Mad King's realm and stop him before he threatens the world of Tyria.

Note: Like any dungeon, rewards are affected by Diminishing returns; the number of bags and bonus items will decrease to 3/2/1

The Mad King will use various attacks:

Stun breaks and condition removal are valuable to get rid of Fear and avoid accidental deaths from running off cliffs. The boss also has a defiance bar that will stun him for a short time once it's depleted, so crowd control can greatly speed up the fight. In between fighting, there are two sections where jumping to platforms below is required. Although daunting, there are non-fatal routes down. In case you die, a checkpoint waypoint is available.

Initially, Mad King Thorn will be invulnerable, standing on an isolated piece of land. From here, he will begin Mad King Says. Party members will need to fight the Halloween enemies entering through Haunted Doors, but all players' skills will be changed to emotes similar to during Lunatic Inquisition. Once the correct skill is used, you will get your regular skills back and be able to fight. If you do not use the correct skill for the emote he says, you'll take damage and be knocked down. Note that the chat command emotes do nothing, and the corresponding skill must be used. Mad King Says will always ask for the following emotes, in order:

After Thorn goes though his three emotes (whether you joined in or not), he will tire of Mad King Says, teleport to where the players are and start attacking. At this point, bring him down to 75% health. At 75% health, Thorn will become invulnerable again and disappear to a lower level - look to the southeast to see the chunks of land you can jump down, and reach the next large piece of land where Thorn waits. A lot of Plastic Spiders will spawn there. When on that piece of land, Thorn will begin attacking again. This time, you must bring him down to 25% health, at which point he will again become invulnerable and disappear.

Like before, he'll appear a level lower. This time, look to the northeast for the way down. There will be two parts where you have to make long jumps - though it may not look it, you can make these jumps without speed boosts. He will teleport back to the middle level if a player dies and respawns and starts walking back down to the middle level. At his defeat, a chest will spawn on the lowest level.

When reaching the floor Thorn's on
Mad King Thorn: (Laugh)

Players received the following mail during Act III of Halloween 2012 as part of the event: