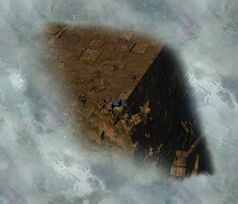 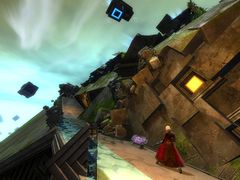 The Uncategorized Fractal is one of the Fractals of the Mists. It is a recreation of a past asuran disaster; despite appearances, it is not Rata Sum but another location built by like-minded architects.[1] It occurs at levels 2, 36, 44, 62, 79 and 91.

Jump up the platforms, killing harpies along the way. Be aware that being in combat causes you to move slower and not jump as far. If you are having trouble moving across the platforms, kill the harpies from one spot and continue after you have dropped combat. At fractal level 12 and above the Harpies have a knockback skill, (signaled by red circle and slow electric projectile), that throws characters off platform. Players respawn downed at start. Harpy density increases as the fractal level does; on lower levels it is possible to aggro single harpies, but on higher levels multiple harpies will aggro at once.

Destroy the Power Generator to open the way forward. However, this also opens the cells allowing the prisoners to get out. The escaping prisoners are a Champion Rabbit, a Veteran Bandit Saboteur, a Champion Flame Legion Fire Shaman and a Champion Ettin. It is recommended to defeat them in that order.

There is a staircase with four turrets at the top. These turrets shoot electric pulses that instantly down a player hit by them. You can dodge through them without taking damage, and can use movement abilities like teleports to avoid them. Reflection skills will reflect the pulses back up the ramp, while projectile destruction skills will destroy them entirely.

At the top, there are three consoles. Having three players activate these consoles at the same time will turn the turrets off. On activation of a console, the player is unable to move for a short duration. It is possible for one player to activate two consoles by using skills such as Mesmer's Blink or Elementalist's Lightning Flash. A thief can do all three consoles alone by using Infiltrator's Arrow to move between the consoles.

Advancing onward, you will come to a room with a golem, Old Tom.

Poison and deals damage to all players. The console directly across the room will activate a fan to evacuate the poisonous green gas (strong poison debuff). On fractal difficulty level 12 and higher, players need to charge the fan batteries in the opposed two corners of the room with Tears of Dwayna manually before the fan can be turned on. It's recommended to bring at least two tears to each console, before you engage the boss.

Old Tom has two principal abilities. It can shoot volleys of projectiles in all directions around it and it can pull a player towards it. Other than these two abilities, it uses a standard melee attack as well as a bouncing ranged lightning attack that deals a fair amount of damage. To minimize damage taken from the poison whirl attack, players should stay at range so that they are less likely to be hit by multiple projectiles.

After Old Tom is defeated, party will again encounter platforms and harpies similar to start of Fractal. Some of the platforms are a translucent yellow, making them difficult to see. Moving the camera to new angles may help.

The asura will activate his four golems one at a time. After 4th golem is defeated, they will all be (re)activated at once.

Don't bother fighting the shielded Asura, as he remains invulnerable throughout the fight. However, he will shoot slow-moving balls of lightning at players which can be reflected. At fractal level 20+, this attack applies agony. The best way to avoid them is to dodge toward them as they are homing in on you.

The far right will put positive and negative charges on everyone. Stand next to people with similar charges when possible. People standing too near each other with opposing charges (e.g. one with a positive and one with a negative) will cause damage.

When all the golems are dead, the fight ends.

Upon arrival
Dessa: You've landed... I...need to go. I'm sorry.
Dessa: I...I apologize for leaving you like that. Just...never mind. Keep progressing. You're getting closer to the local instability.

Upon reaching the Raving Asura
Raving Asura: All of us! Abandoned! You aren't real. You can't be here.
Raving Asura: I couldn't save them. I heard them all. Pleading. All gone. All on my watch!

The Uncategorized Fractal that was seen in the end cinematic.

Fractals of the Mists
Retrieved from "https://wiki.guildwars2.com/index.php?title=Uncategorized_Fractal&oldid=2339612"
Categories: