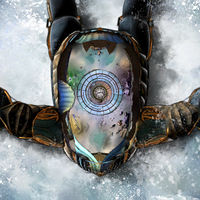 Tixx's Infinirarium is a dungeon only available during Wintersday. Players assist Tixx in creating Wintersday presents for all of Tyria, despite the haywire machinery, toys, and Toxx.

The ground floor features destructible scale models of buildings and trees from throughout Tyria; destroying them earns the Wintersday Wrecking Ball achievement. This dungeon is also the easiest place for players to find malfunctioning toys, which need to be killed for the Disassembly and Toy Quality Control achievements. Due to dynamic level adjustment, all participants have their effective level raised to 80.

The entrance to Tixx's Infinarium, marked with a peppermint icon

, is located just west of the

Crown Pavilion Waypoint — in Divinity's Reach. It is only accessible during Wintersday.

This is for the current release. For the original release, go here.

Those princess dolls sure are demanding. They want gifts!

Skritt stowaways have taken over the princesses' hamlet!

Tixx the Toymaker needs help around the workshop!

Princess Doll: Call me Princess!
Princess Doll: I'm the princess! And I do what I want!
Announcer: Attention: toys en route to storage are exhibiting unexpected behavior.

The Ventari toys' turrets are out of control[edit]

Announcer: Attention: malfunction in the testing area. Test subjects are out of control.

The overzealous toy soldiers are out of control![edit]

Tixx the Toymaker needs help around the workshop![edit]

Toxx: Target—acquired. Hic! All—t-targets—must—remain—still—so I can destroy you.
Toymaker Tixx: Oh! Put her into sleep mode. I need to recalibrate her procols!

Once Toxx reaches ~50% health
Toxx: I—have—the—spirit—of—Wintersday—in—me!
Toymaker Tixx: Oh! Put her into sleep mode. I need to recalibrate her protocols!

Completion
Announcer: Congratulations. You are victorious.
Toxx: Hic! Systems—hic! Shutting—down...
Toymaker Tixx: And a this, and a that, and a tweak to the torque nodule. There. That ought to do it. All better.
Toymaker Tixx: Happy Wintersday to one and all! Now, get back to work!

Apprentice Yemm: I'm craving warm chocolate and a blazing hearth. I think I was meant to be a norn.

Apprentice Yemm: I have the most exciting apprenticeship of all my peers!

Fless: Sometimes I forget Toxx is a golem. Sure, her speech is stilted–but so is Grupp's.

Toymaker Tixx: This Wintersday will be full of wonder!