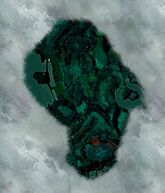 The Captain Mai Trin Boss Fractal is a boss fractal in Fractals of the Mists that reprises the fight against Mai Trin from the hidden Aetherblade base. This fractal is available at Fractal levels 18, 42, 72 and 95.

The fractal starts with a short battle with Aetherblade and Inquest guards, including a Champion Inquest Technician. After the guards are defeated, the party enters a docking platform, where they confront the Aetherblade leader Captain Mai Trin, First Mate Horrik, and the full might of Aetherblade artillery. Once anyone in the party enters the area, all party members are teleported inside. Mai Trin has a quick conversation with Horrik after entering before the fight begins.

Mai Trin herself uses several attacks, including a shadow step towards the player who is farthest away from her. Consequently, it helps for the party to remain close to her so that she is more likely to end up within range of the electrostatic shot AoE; the party can dodge out of the shots at the last moment. Individual and party-wide condition removal is essential, since she can also inflict multiple conditions at a time.

Inexperienced players will tend to try to fight from range, as they attempt to avoid her attacks. If that happens, experienced players should stack up with the ranged player, because that increases the chances that Mai Trin will get caught in Horrik's AoE and Mai Trin will ultimately step to the ranged player in any case. Try to break her defiance bar as often as possible to help land blue bomb shots, and to limit the party's exposure to her condition attacks.

At 75%, 50% and 25% health, Mai Trin will stop attacking and order Horrik to "Unleash the cannons". Mai Trin will leave the area and begin firing cannons with her other cannoneers. Horrik will remain. The party must lower Horrik's health by 25%, as they did with Mai Trin.

Soon after Mai goes up to the cannons, she will spawn three or more Aetherblade pirates to help Horrik deal with the player. If Horrik's health is depleted and Mai comes back before these additional pirates are taken care of, they each gain the Captain's Inspiration effect, dealing extra damage. It is recommended that the group use pulls to cleave out multiple opponents at once.

Once Horrik's health is depleted to 25%, Mai Trin will no longer have the shield effect on her.

In Master Tiers (Tier 4), three additional enemies will spawn after the third artillery barrage when Mai Trin reaches 25% health: Elite Boarder Zonn, Elite Boatswain Stormsplit, and Elite Sharpshooter Tarron. They can be a big nuisance if left alone, so refocusing attacks and eliminating them before finishing Horrik or Mai Trin makes the fight simpler. Tarron in particular deals a large amount of ranged damage, and should typically be focused out first.

Talking to Inspector Kiel
Mai Trin and her crew came through here. I've got a bad feeling about this, but at least you're here too. Let's go.

Talking to Inspector Kiel at entrance to docks
Behind this door is Mai Trin. Are you ready to face her?

Entering the arena
One of the following:

First Mate Horrik: What now, Captain? It'll take cannonballs to get out of here alive.
One of the following:

Mai Trin: Either way, I'm dead, so let's wind our springs and ride this escapement to the end.
Mai Trin: I'm dead either way. Might as well strap in for a decent fight.

First Mate Horrik: You got it. I'll undock the airships.
One of the following:

At the start of the fight
Mai Trin: This is what your curiosity gets you.

Mai Trin returning after Horrik reaches a health threshold
Mai Trin: No more half measures. All hands on deck!

When Mai is defeated
One of the following:

Inspector Ellen Kiel: Lionguard, take our intrepid airship captain into custody. Don't take your eyes off her.
Lionguard: On it, Investigator.
Dessa Observatin Mode: Hmm. I'm still confused about what these hooligans are doing, but it looks insidious. And who is this Scarlet? Come on through.

Fractals of the Mists
Retrieved from "https://wiki.guildwars2.com/index.php?title=Captain_Mai_Trin_Boss_Fractal&oldid=2561215"
Category: