This article is about the fractal. For the story step, see Molten Furnace. 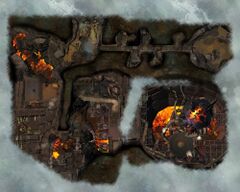 Attack the Molten Alliance weapons facility with the help of Rox and Braham.

The Molten Furnace Fractal is a Fractal that occurs at levels 9, 22, 39, 58 and 83. It reprises the first part of the attack on the Molten alliance Weapons facility as encountered during the Flame and Frost: Retribution release.

The party first meets Rox and Braham preparing to enter the facility. Speak to Rox to begin the fractal.

After talking to the two, the party will first face an ambush by Molten Alliance enemies: 2 Oscillators, a Stalker, and a Resonator. Once dealt with, a Molten Brawler will appear. After defeating them, return to Rox to start the drilling machine.

The drill proceeds to excavate a tunnel. While operating, the drill will cause burning to players standing too close behind it and the ceiling will cave in periodically, knocking down players caught in the area of effect. The tunnel will break into five side chambers on the way, each home to a random group of enemies and a mithril node. The nodes can yield Azurite Crystal. Also, in each side room is a steam geyser that can be closed by covering it with a nearby boulder.

At the end of the tunnel is a large open area with a big group of Molten enemies. Take them out and then move toward the steam wall. Wait until the steam wall comes down before running across it or you will be knocked back and dealt a lot of damage. Continue down the rock pathways to the chamber entrance and go inside.

Section-stub. This key section of the article is incomplete. You can help the Guild Wars 2 Wiki by expanding it.
Reason: Missing enemy names, and how much changes between runs or at higher fractal tiers

This takes place in a fenced area with the thermal core in the center. The event will not start until Rox and Braham enter the room. This final room is split into two fights. The first is a 4 phase fight where your party destroys the thermal core and survives weapons tests. The second is a separate fight with the Weapons Test Engineer that occurs after the thermal core has been completely destroyed.

As soon as the weapons tests end and the thermal core becomes vulnerable, adds will spawn around the room whose attacks will need to be avoided while your party damages the core. For the second and third phases only, a Molten Protector will spawn immediately next to the core on the side closest to the original entrance to the room. This add will need to be pushed or pulled away from the core since, a few seconds after spawning, he will create a temporary ring around himself. For its duration, anything in this ring, including the thermal core, is immune to all damage. Skills such as Guardian's Banish, Mesmer's Illusionary Wave, or Warrior's Fear Me should be used to move this dredge away from the thermal core. It should be noted that if the dredge does create this invulnerability ring, although immune to damage, he is still susceptible to crowd control.

The fourth phase consists of every weapons test occurring at once while simultaneously destroying the remaining 25% of the thermal core. It is generally a good idea to save your damage cooldowns for the fourth phase since it is the only phase that your party must damage the core while dealing with weapons tests.

In this phase, multiple fireball barrages will be launched into the area, painting the ground with red circles. There are various safe spots around the room at any given time during this phase, usually these spots are near the corners along the walls or toward the center, or the party can reflect the fireballs.

In this phase, stompers will pound down in corners of the area, causing circular traveling shockwaves. The shockwaves will not cover the entire room, but will at least reach the thermal core and a bit farther. The party will need to either run away from the shockwaves, jump over them, or dodge through them.

The shockwaves follow a specific pattern which repeats until the next phase:

In this phase, a series of fire tornadoes will start on one side of the area and surge like a rake to the other side of the room. Getting hit will damage and knock the player back. The party needs to squeeze themselves into the free areas between the tornadoes, dodge them, reflect them, or use the thermal core for cover. Alternatively, the party can stand against the gate on the left wall (as you walk into the room) and avoid all damage and knockback from the tornadoes.

In this final phase, the party will face all previous phases at once. The thermal core shield is constantly down, though, so focus fire on it to end the phase.

Once the core is defeated, the engineer will (eventually) come down himself to the test area. He can shoot the fire tornadoes and can trigger the heavy weights to create shockwaves. Defeat him to end the fractal.

Upon entering
Dessa Observation Mode: Ah, an underground facility. Strange. I'm reading myriad signals. And who is that with you? A norn boy and a female charr?

Speaking to Rox
Rox: No time to lose. Are you and that red-headed norn ready?

Hold on. We're not quite ready.

Speaking to Braham
Braham: I'm so antsy. We need to get moving. Go tell that charr that we're ready to go.

After talking to Rox
Rox: Got it! Okay, don't follow too close. These things can spit hot rocks! Here we go!
Braham: We can handle them! Spread out!
Elite Molten Brawler: You will die in flames.

In the tunnel (in random order when a pocket has been opened)
Braham: Watch out! We've hit a pocket of... What is that?
Braham: Oh, ew. Is that thing normal?
Braham: This must be a lair.
Rox: Knock, knock! Exterminator's here.
Rox: Local wildlife! Heads up.
Rox: Stay alert. These underground creatures can be cunning.

Approaching the weapon test area (cutscene)
Braham: Uh-oh. The wolf in me is growling.
Rox: Mine, too. I mean... You know what I mean.
Braham: Believe me. I do.
Rox: They're testing weapons here...on their captured prisoners.
Braham: Is that—great Spirits, I know him!

After first weapon test complete
Rox: The guts of the machine are behind those doors. Give it all you got!

After all three weapon tests complete
Weapons Test Engineer: This thermal core is crap! Where are my results? I want results! Fire EVERYTHING!

Fractals of the Mists
Retrieved from "https://wiki.guildwars2.com/index.php?title=Molten_Furnace_Fractal&oldid=2501792"
Categories: