This article is about the pirate faction. For the fractal, see Aetherblade Fractal. For the dungeon, see Twilight Arbor (explorable).
Stub. Key elements of this lore article are incomplete. You can help the Guild Wars 2 Wiki by expanding it.
Reason: pre-EoD and EoD stuff
Spoiler alert: The following text contains spoilers relating to Living World Season 1, Living World Season 4, and Guild Wars 2: End of Dragons.

The logo of the Aetherblades.

The Aetherblades are a multi-racial group of sky pirates who became prominent during Scarlet's War. They commandeered several Pact airships,[1] and waged war from the skies all over the continent at the behest of Scarlet Briar. As members of Scarlet's Alliance, they were initially allied with the Inquest, who helped them maintain their airships and provided them with golems, although most of the involved Inquest eventually abandoned the alliance once Aetherblade operations were compromised by the Pact Commander. They first attacked on Lion's Arch to set Scarlet's plan in motion, with witnesses claiming that they flew in from the southwest.[2] After Scarlet's defeat and disappearance of their second in command, Mai Trin, the sky pirates retreated and their current whereabouts are unknown, although some hints point at Cantha. 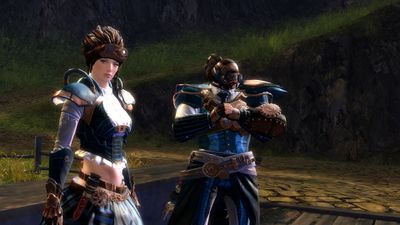 Aetherblades getting ready for action.

The Aetherblades started out as a particularly greedy and bloodthirsty pirate crew in which Mai Trin held high rank; when the sylvari terrorist Scarlet Briar found them and presented them with Inquest magitech and allies, the crew became far more dangerous and far more successful at the business of pirating. Officers like Mai kept the Aetherblades organized and active, and their ranks swelled as more and more unaffiliated pirates and pirate bands signed on, lured by the promise of easy money and power. Once they were in, however, they found it problematic to get out again, as Scarlet had plenty of work for them to do and kept them hard at it or they would face her wrath.[3][4] The Aetherblades managed to steal Pact airships and modified them into their own vessels called aetherships.[1] They were the first known faction to use rapiers, introducing these weapons to Central Tyria.[2]

The Aetherblades first appeared in public at the 1326 AE Dragon Bash, disrupting the effigy lighting ceremony and causing the death of Captain Theo Ashford. Upon investigation by Inspector Ellen Kiel and Delaqua Investigations on behalf of Logan Thackeray who wanted the murderer of his family friend Ashford brought to justice, it was discovered that this was a scheme to generate an opening on the Captain's Council (Ashford's second was also killed, by the Molten Alliance), which would be filled by the Aetherblades' (ostensible) leader, Captain Mai Trin.[5] Mai Trin eluded capture, however, and Lion's Arch authorities discovered that the Aetherblades had a retreat hidden in Lion's Arch, and a second site in the Gendarran Fields.

The Lionguard were able to defeat Mai Trin and First Mate Horrik with help from the Pact Commander, and they hoped that it would bring an end to the pirates' machinations. However, the Aetherblades eventually returned in far greater numbers and with far more airships, attacking Divinity's Reach in an attempt to disrupt the Queen's Jubilee, where it was revealed that the Aetherblades were working for Scarlet Briar. They also set up a base in the Twilight Arbor, after Scarlet had worked out a deal with the Nightmare Court.[6] The defenders of Tyria were able to thwart the pirates' plans by shutting down their operations although many lives were lost in the process. At some point most of the Aetherblades' Inquest allies abandoned the pirates.

Mai spent time incarcerated in Fort Marriner and taunted both Ellen Kiel and the Pact Commander, who had tried to question her for her motives, while ominously stating that they should keep their eyes to the sky. She was later freed by her Aetherblades and taken to the Edge of the Mists, pursued by the Commander's allies Braham and Taimi. Braham vowed to wring Mai's neck for escaping, as the resulting chaos had led Taimi into a dangerous area where she could have been killed. The Aetherblade captain eluded capture, however, and learned that Scarlet wanted her alive for another mission suited for her talents.[7] She and her followers set up a temporary base of operations at the Juncture in the Edge of the Mists.[8]

Marjory Delaqua's later investigations revealed that Mai had been acting at the behest of Scarlet Briar, who had wanted an ally on the Captain's Council. Kasmeer Meade and Marjory speculated that it was so Scarlet could weaken the city's defenses from within.[4] These fears were founded once Scarlet's Alliance invaded Lion's Arch. While several Aetherblades participated in the Battle for Lion's Arch under Scarlet's command, none of the faction leaders of Scarlet's Alliance, including Mai Trin, were present in the city when the Pact Commander killed Scarlet. Mai Trin remained elusive since, and her current whereabouts remained unknown.

By 1330 AE, the Elonian Alehound Crew of corsairs managed to steal an aethership during one of their seaborne raids. However, when they were questioned about the airship's origins upon their return to the Corsair Flotilla, none of the crew members remembered how exactly they had acquired the ship as they had been drunk during the raid. They named the stolen airship The Wobbling Skies.[9] 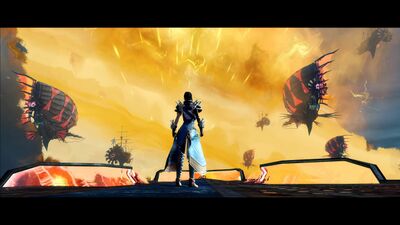 Mai Trin overseeing the flight of the Aetherblade Armada in the Guild Wars 2: End of Dragons Gameplay Features trailer.

In 1335 AE, Gorrik gets kidnapped by Ankka, a former colleague from the Inquest, now first mate to Mai Trins group of Aetherblades. During the pursuit through the Mists, Aurene gets hit by an Extractor, a new kind of weapon, leading to her and the Commanders crash landing on the Canthan Shore, causing an international incident and there by starting the Storyline of End of Dragons.

To repay the Imperial Court's mercy, Empress Ihn allows the Commander to handle the Aetherblade threat. During the investigation, the Commanders learns, that Joon, the Empress Halfsister, had hired Mai Trin years ago, not knowing of here pirate origins. After raidning a Aetherblade Camp and reuniting with Gorrik and Marjory, the Commander finds a hidden Aetherblade hideout, leading to a fight with Ivan and Mai Trin. After deafeating Mai Trin and Echo of Scarlet Briar the Commander learns that Ankka and all other Aetherblades commited mutiny, leaving Mai Trin behind. Despide heavy objections the Commander decides to work together with Mai Trin, to track down Ankka.

During the visit of Soo-Won, in the Yong Reactor, Ankka appears and unleashes the Extractor on Soo-Won, releasing here and forcing a meltdown. Mai Trin sacrifices herself to stop the reactor from exploding. The Commander manages to escape but gets blamed for incident and has to go into hiding.

After tracking down Aetherblade activity in The Echovald Wilds but failing to find Ankka, the Commander gets unexpected help, by Canach and Sayida, who have used an Aetherblade Airship to open a social Club. Ivan helps the Commander to send out a false message to the Aetherblades' coms network and setting up a trap in Xunlai Jade Junkyard. After killing Ankka and finding the Extractor, the Commander learns, that Ankka has Sabotaged the Extractor, hindering our plans for one last time. 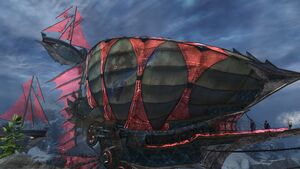