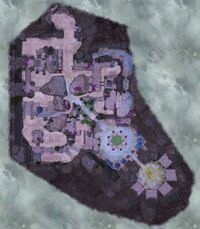 Spearhead the assault on the oasis.

The Twilight Oasis Fractal is a Fractal and occurs at levels 16, 41, 59 and 87. Players take the role of Mordant Crescent forces and join Palawa Joko as he solidifies his control over Elona.

When players first enter the fractal they will be greeted by Palawa Joko, who thanks them for tracking down the Sunspears. Players will need to make their way through the small town and down the stairs to the southwest and into the small arena encircled by buildings where they will fight an Elite Sunspear Sandbinder.

The most annoying part of this fight are the two Tornadoes roaming the area. They do not target players directly, however if a player gets too close they will start gravitating towards it. The tornado will

Blind players and deal more damage the closer one gets to the center.

Every once in a while he will gain a defiance bar and start channeling Wall of Earth which will creating an expanding circle that deals a large amount of damage to players it hits. There is no method to avoid this attack.

After defeating the Sandbinder, the wall in the back of the area will disappear allowing players to move forward. Shortly afterwards, players will reach a courtyard with High Priestess Amala in the center. When her health reaches 75%, she will do a massive attack that will "kill" all players and she will retreat to the temple in the back. Joko will appear shortly after and turn all players into Awakened, granting access to the Enhanced Reflexes special action skill.

Players will need to use their special action skill to jump up the buildings to the right and navigate through the rooftops in order to find and kill the two Sandbinders maintaining the barrier. It is possible to reach the Sandbinder through a series of shortcuts, as shown in the images below.

After killing the final Sandbinder, players may drop down to the courtyard and head into the temple where they will find Amala being protected by nearby Sunspears. After killing all of the Sunspears, the fight against Amala will begin. 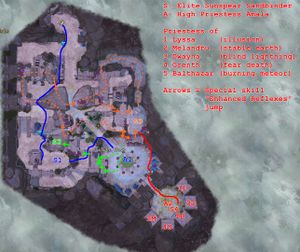 Amala will begin by disappearing and then summon multiple clones of herself. The clones will attack players with Winds of Chaos, dealing a small amount of damage and applying conditions. However, like mesmer clones they cannot withstand many attacks. There will also be Portal traps spread around the area that will teleport players into the air and give the

(unnamed effect) effect while floating. After a certain period of time Amala will disappear and reappear in a different location, resummon clones and change the layout of the portals. Players will need to find the real Amala among them. Tab-targetting by default jumps to the highest ranked enemy. Pressing Tab will typically select the right clone. The correct clone will have the Legendary-rank purple circle on the NPC portrait. The other clones have no colored ring on their portraits. 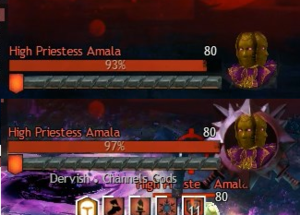 Portraits of the fake and real Amala during the Lyssa clone phase.

A player will occasionally be targeted by her Polymorph Moa attack, indicated by a small circle expanding underneath their feet. Once fully filled, all players within that circle will be transformed into moas. This can be dodged, evaded and blocked. If this skill goes off while the character is in the air via Enhanced Reflexes, it is evaded, and it cannot harm allies.

Once she is brought down to 85%, she will teleport to the center and start channeling Mystic Detonation. If her defiance bar is not broken in time, everyone will take a large amount of damage and she will heal (slightly). Once broken the barrier protecting the Priestess of Lyssa will fall. If the priestess is not defeated during the time limit, Amala will heal slightly.

The Priestess will teleport to a different spot every 25%; going West, East, then North (relative to her platform). A direction may be skipped if she takes too much damage while stunned. Once she is defeated, the next phase will begin.

This phase starts with her summoning a Champion Earth Elemental This elemental will fixate on a random player, targeting only them with its attacks. It is not worth the time to kill this champion, however the fixated player is recommended to kite it away from the rest of the team so that they may focus on Amala.

Starting at this phase, Amala will occasionally use her Mystic Wave attack (similar to the Wall of Earth attack used earlier), indicated when she brings her scythe above her head and a small circle appears in front of her. This attack can only be avoided by using your special action skill. See Aerialist achievement below.

At 65% she will start channeling the same attack as before. Player will need to break her defiance bar again in order to reveal the Priestess of Melandru. The Priestess will have two Veteran Earth Elementals guarding her, and will also constantly apply

At the start of this phase, she will start by channeling Smite Undead, marking where players are standing with a small circle and lightning will fall shortly. If hit, you will take a small amount of damage and be

Dazed for a short while. She will continue to use this attack throughout this phase. Players should try to run away from each other during this phase and try not to cross anyone else's line of circles. Using your special action key to leap into the air can help you and your teammates avoid damage, as the AoE tracks footsteps, and can't appear while you're in the air.

At 60%, Amala will summon Tornadoes similar to those summoned previously by the sand binders. These will rotate around the area, and draw in and

Blind your character much like those you have encountered before.

At 45% she will teleport to the center and start channeling the same attack and players will need to break her defiance bar again to reveal Priestess of Dwayna. Her platform is showered by lightning.

Her primary attacks here are her melee strikes, which will summon small Chilblains and Sand Swell AoEs that detonate and apply

Chilled respectively, all on top of knockdowns and

Bleeding from the strikes themselves; Amala will also use an Executioner's Scythe and Soul Spiral to stun a player and apply

She can also cast Rise which will summon ten Shambling Horrors as well as an additional five for every target hit by this attack, with each Shambling Horror lowering the damage she takes. She also has a smaller, subtler attack: Claim Soul. This small AoE does no damage, but will instantly down a player if they are hit by it (this will ignore Death Shroud, Rigorous Certainty, etc).

After reaching 40%, she will create walls around the arena, summon Flesh Wurms, and teleport to a random spot behind a wall. Touching the walls will apply

Fear, so they must be jumped over using your special action skill. You may also simply range her until she comes back.

At 25% she will teleport to the center and start channeling the same attack and players will need to break her defiance bar again to reveal Priestess of Grenth. There are a couple of enemies on the platform with her, but they are easily dealt with.

10 Might) throughout this phase, with one application every 10 seconds.

Every once in a while, she will use Call Meteor on a random player, marked by the large circle on the ground. The meteor will do a large amount of damage when it lands and a small shockwave will spread through the area dealing a small amount of damage. This shockwave can be jumped over (special action skill is not needed). The meteor's radius increases with Fractal Tier (1,2,3,4)

Amala can also use a more powerful form of this attack, which has a far larger AoE, will still send out a shockwave, while she will simultaneously send a large pattern of circular, knockback applying AoEs from her current location.

At 18% hp Amala will spawn two large fiery tornadoes, with one being far larger than the other. The large tornado (roughly 600 units in radius) will slowly move in a large circle around the area, while the other will travel in an Epitrochoid pattern around the outside of the area. These tornadoes will draw you in and deal damage depending on how close you are to their center.

At 5% she will teleport to the center and start channeling the same attack and players will need to break her defiance bar again to reveal Priestess of Balthazar. She is immune to damage, but is tethered to four nearby Sunspears. Killing each Sunspear decreases her health by 25%.

After killing the final priestess, players can head down and defeat Amala.

Once she is defeated, players may watch Palawa Joko awaken Executioner Amala. 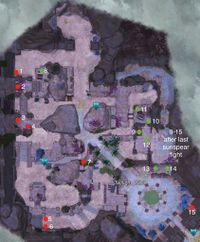 A map for "Mercy of the Mordant" - Red dots represent NPCs on the ground level, while green dots represent the ones found atop buildings or balconies.

Entering the fractal
Palawa Joko: There you are. We've started without you. I trust you'll enjoy the reunion.
Palawa Joko: You've demonstrated allegiance to your king by helping track these dogs. Solidify your loyalty—spearhead the assault.
Palawa Joko: Let all the desert region see that defying me is certain death. Drown these streets in Sunspear blood.
Dessa: Palawa Joko? That reanimated cadaver hurts my eyes.
Dessa: Anyway...it appears you're somewhere in Elona, in the past.
Dessa: Judging by your gear, I'd say you're Mordant Crescent—traitors broken by Joko, slaves to his will.

Talking with Joko at the entrance
Was I not clear about your role in this operation? It involves the slaughter of Sunspears for your king. It does not involve speaking.

I would like to ask you a few questions.

(Joko puts the player in a downed state)
Palawa Joko: Any further inquiries? No? Perfect.

Defeating the Elite Sunspear Sandbinder
Palawa Joko: Skillful. Ruthless. Perhaps lacking a bit in spectacle... Still, your king approves.
Palawa Joko: My powers of perception are confirmed. I had a feeling you'd take to your new tasks with conviction.
Palawa Joko: Now, before these Sunspears can live forever serving their king, they have to die. Get to killing.

Dessa: I have to admit I'm a little disturbed by your enthusiasm here.

Dessa: I appreciate how hard you're throwing yourself into my research. I think.

Dessa: Wow. Uh...you are really embracing your role in this fractal.

Fractals of the Mists
Retrieved from "https://wiki.guildwars2.com/index.php?title=Twilight_Oasis_Fractal&oldid=2339611"
Category:
Hidden category: