The dredge have claimed all the former lands of the Dwarves. What was once Sorrow's Furnace is now Sorrow's Embrace, but great powers may still be found within these depths. 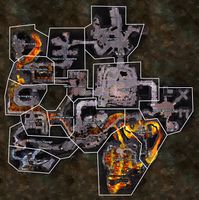 Sorrow's Embrace (abbreviated SE) is a large dredge underground city within the Shiverpeak Mountains. It was first a dwarven foundry and mine until the Stone Summit took it over to use as their main base of operations, naming it Sorrow's Furnace, where they enslaved various races including the dredge. In 1072 AE, the Stone Summit were defeated in the dwarven civil war and the dredge began revolting, forming the moletariate and claiming the mines, renaming it Sorrow's Embrace. Recently, however, the moletariat have become corrupted and influenced by the Inquest, turning to enslave their own kind in continuous mining.

Completing this dungeon's explorable mode or its reward track awards Tales of Dungeon Delving, which can be used to purchase the dungeon's armor and weapons from any Dungeon Merchant. 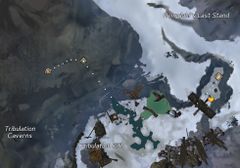 Location of the Sorrow's Embrace entrance.

If you do not have the Sorrow's Embrace Waypoint, head to it through Tribulation Rift or you can sneak in from Heimdahl's Last Stand hugging the cliff face on your right and making a few jumps down.

Follow the water towards the northwest wall. There is a tunnel leading to the waypoint.

The dredge have claimed all former lands of the dwarves. What was once Sorrow's Furnace, a place of dredge enslavement, is now known as Sorrow's Embrace. Great peril may still be found within these depths.

The Inquest have been driven out of Sorrow's Embrace, but the politics of the dredge have left the situation turbulent as various factions joust and position themselves for power. Old enmities and oppressions now come to a head, and the heroes are thrust into the middle of it.